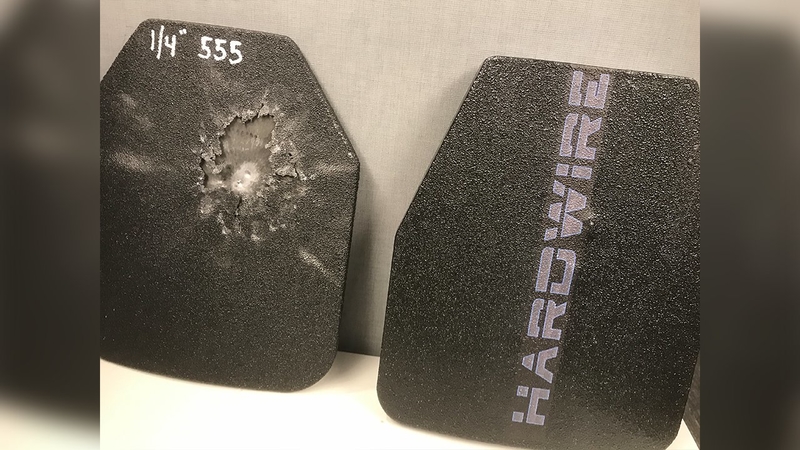 NEW YORK (WABC) -- An Eyewitness News Investigation into body armor being used to protect New York State Police from high-powered rifles like the AR-15 is raising serious questions. In side-by-side tests, the State Police armor failed to stop AR-15 high-velocity bullets while a competitors did. New York State Police received around a million dollars in emergency funding from Governor Cuomo to up-armor some 4,000 Troopers, following an increased use of AR-15 rifles in mass shootings nationwide. The agency purchased Hardwire rifle plates out of Maryland even though a competitors armor made right here in New York appeared to hold up better against AR-15 bullets.

The competitor Buffalo Armory agreed to demonstrate their steel plate against the Hardwire armor purchased by the State Police. At a firing range near Buffalo, we observed two high-velocity bullets fired at the Hardwire body armor. Both of the bullets penetrated the plates. When the same bullets at the same speed were fired at the Buffalo Armory plate, there was no penetration. Similar results occurred when an independent ballistics lab, National Institute of Justice tested the two products. The Buffalo plate stopped all three bullets from an AR-15. The Hardwire plate now worn by State Police Troopers stopped only one of the three bullets.

So why did the State Police chose Hardwire when there was no difference in the costs? They claim that when Troopers wear the new Hardwire plates over their soft-body armor, they get the same protection the Buffalo armor but at half the weight. The new armor weighs eight pounds versus the competitor's 16-pound weight. State Police were also concerned about bullet shrapnel from the Buffalo plate posing significant hazard. State Police Spokesman Beau Duffy says, "Any suggestion that this new equipment jeopardizes the safety of our members is simply without merit."

But the former Assistant Deputy Superintendent of the State Police, Col. Gerard Kropf (Ret.) told us, "Weight was not a big issue because the plates were for an active shooter situation which happens quickly." Kropf actually was on hand when the agency tested the Buffalo Armory's plate but retired before the contract was awarded. He says, "Against multiple shots, Buffalo Armor was superior." He adds, "I'm at a loss as to why they chose the other product." He also points out that even when Hardwire armor is worn over a Trooper's soft-body armor there would be concern that serious injury could still occur from the impact trauma resulting from the bullet penetrating the Hardwire plate.

The President of the State Police Patrolman Benevolent Association, Thomas Mungeer says the newly-acquired armor is "adequate." He says, "If there's something better out there I urge when I attempt to secure other funding, that the Buffalo company resubmit their bid."

The Hardwire Company responded to our investigation saying, "Hardwire does not recommend use of steel body armor due to the inherent risks associated with shrapnel and ricochet. The Buffalo armor is made out of steel. In the course of our investigation, we learned that the NYPD purchased 12,000 Hardwire rifle plates last year in an emergency purchase following the killing of 5 Dallas Police Officers. We are waiting to hear back from the NYPD on whether the Buffalo steel plate was even considered."

Buffalo Armory's Scott Sulzbach says their steel plates are not meant to be worn for hours. He says it is for an active shooter environment and that's what he understood the State Police were shopping for. He adds, "If I'm out there comfort is not my priority. I want to be sure I have something that could stop a large range of ballistics and I'm safe and can go home to my family."