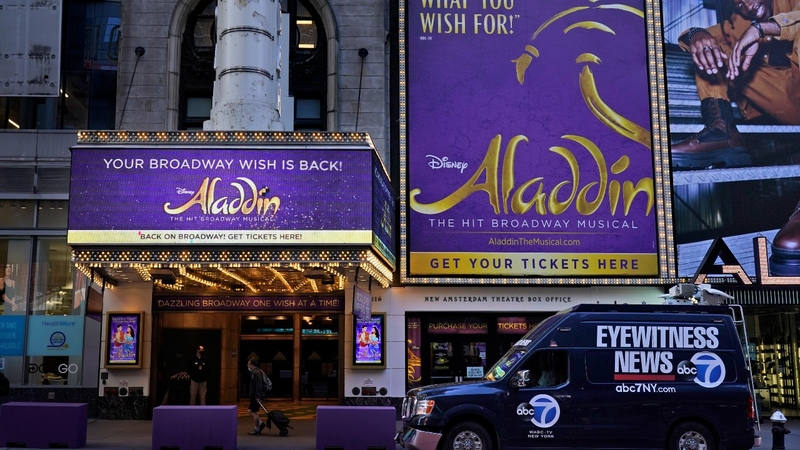 NEW YORK CITY (WABC) -- These past few weeks have been tough for Broadway, with some shows having to cancel performances or close entirely due to positive COVID tests within their companies.

Now that performances have resumed for Disney's "Aladdin" and "The Lion King," those involved planned a special curtain call Thursday.

The message is straightforward: Broadway is open.

Sandy Kenyon previews "Women of the Movement," a new limited series premiering on ABC, that takes a look back at the brutal kidnapping and murder of Emmett Till in 1955.

Few industries were hit harder than live entertainment and particularly Broadway, which was in the dark for 18 months due to the pandemic, and the new push is part of an effort to spread the word on social media with the hashtag #BroadwayIsOpen."

"It was really for us to make sure that the word about Broadway still being open was loud and clear," Scott said.

He's one of the most upbeat performers on Broadway, but his patience was tested when his musical had to shut down after a few in the company tested positive for COVID.

"We went down for a second," he said. "We got right back up, and that's what we do on Broadway."

Sandy Kenyon has more on Alana Haim and the acclaim for her first film role in "Licorice Pizza," one of 2021's best films.

So he said it felt especially great leading the "Aladdin" cast in a rendition of "New York, New York" before saying goodnight.

"Broadway is New York City," he said. "We are back, we are here, and we ain't going nowhere."

Disney Theatrical, which produces "Aladdin" and "The Lion King" is owned by the same parent company as ABC7.