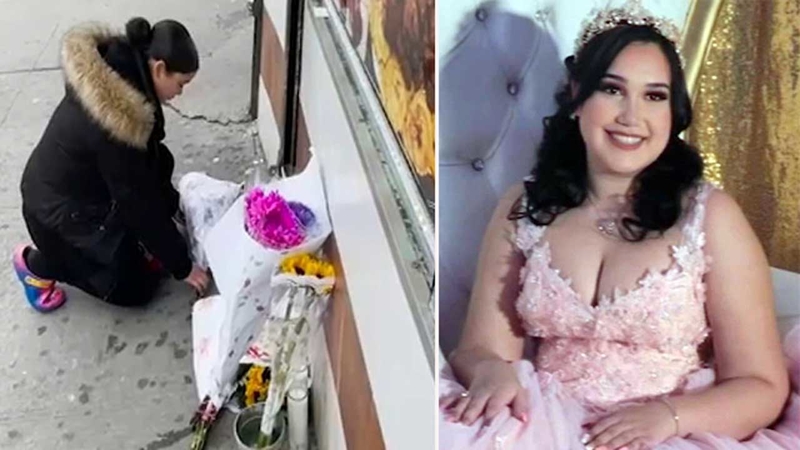 MELROSE, The Bronx (WABC) -- Family and friends said goodbye Tuesday to a 16-year-old girl who is one of the latest victims of gun violence in New York City.

The public viewing for Angellyh Yambo began at 2 p.m.

Yambo was caught in the crossfire Friday as another teen began firing a ghost gun, made from a kit obtained online.

A memorial has grown where the tragic incident happened, outside a deli on East 156th Street and St. Anne's Avenue in the Melrose section of the Bronx.

Yambo, a student at University Prep Charter High School, was a beautiful young woman who had just left school.

She was minding her own business when the gunfire erupted.

The bullets were being fired at someone else but missed and flew half a block, where they struck Yambo and another girl.

Investigators say he was arguing with someone else when he pulled out a homemade ghost gun and shot three innocent teens.

"We need a change," said Yanely Henriquez. Angellyh's mother. "You know, we should not be burying our kids. Mothers should not be going through this. We need to do something about these guns. How people are able to watch a video and do a gun, like a dresser?"

On Monday, his administration announced that the Department of Justice will expand the definitions of "firearm," frame," and "receiver" so that more guns are subject to federal laws.

The definition will now include ghost guns assembled from kits purchased online.

The weapons come in pieces and don't have serial numbers, meaning they can't be tracked if used in a crime.

But that will change if the president gets his way.

Gun rights activists are already vowing to sue the Justice Department over the new rule.