Police say the weapon used was a so-called ghost gun, an untraceable firearm made from a kit you can buy online.
WABC 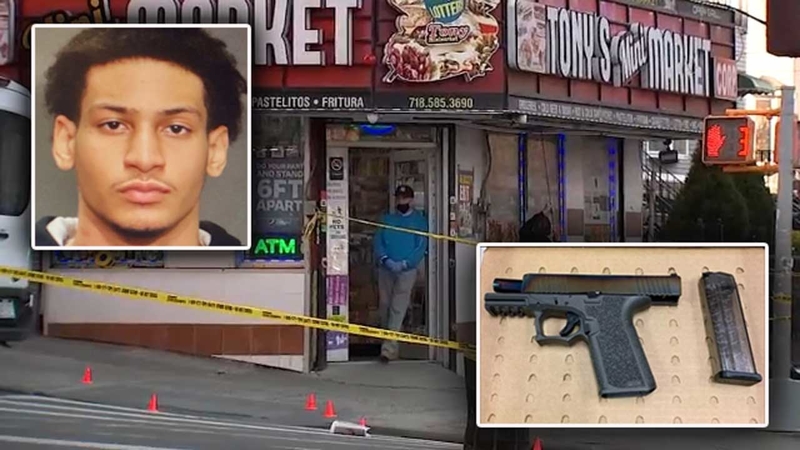 MELROSE, The Bronx (WABC) -- Calls for justice grow louder in the Bronx, where three teenagers were shot -- one fatally -- near their school, with the 17-year-old suspected gunman being charged as an adult.

Jeremiah Ryan appeared in court Monday, amid calls to increase the number of safety agents working at schools.

Grief counselors were available for classmates of Angellyh Yambo, the University Prep Charter High School student who was shot and killed walking home from school Friday.

The gunfire erupted at the corner of St. Ann's Avenue and East 156th Street in the Melrose section of the Bronx, and police contend Ryan stood outside the corner bodega and fired half a dozen shots at another young man across the street.

But the bullets missed and flew half a block, where they struck Yambo and another girl. A third bullet struck another student a block away.
EMBED More News Videos

Jeremiah Ryan is due in court Monday. Police say the teen had no criminal record when he opened fire Friday afternoon just after school let out. Sonia Rincon has the latest.

Yambo was hit in the back, and she died from her injuries after the bullet pierced one of her lungs and a pulmonary artery.

Funeral services are set for Tuesday, and her heartbroken mother is speaking out.

"I am preparing for one of the hardest days of my life tomorrow," Yanely Henriquez said. "We need a change. You know, we should not be burying our kids. Mothers should not be going through this."

She said she still cannot process what has happened.

"To see the picture of my daughter on TV is something that is unbearable," Henriquez said. "And I can't process it, still. I still question myself like why my daughter's picture is on TV."

At the scene on Monday, mothers who have experienced the same horrific loss gathered to demand change and accountability.

"I know their pain, and there is hope," she said. "I want them to know, the families, that you're not alone."

Eve Hendricks' son Brandon was also an innocent bystander and student with a bright future shot and killed in 2020. The suspect's trial in that case starts this week.

"We also need the judges' hands to be free to make the right decisions and keep criminals in prison and off street," she said.

Yambo was a ninth grader at University Prep, which was co-founded by American Federation of Teachers President Randi Weingarten.

"Senseless shootings of children should never happen on the streets of New York or in a school," she said. "And if we are not angry about and we are not upset about it, then we have lost our humanity."

Police say the weapon used in the shooting was a so-called ghost gun, an untraceable firearm made from a kit you can buy online.

"We actually heard the shots when it happened," junior Carlo Coelo said. "We were down the block from the school."

Coelo and his friend, Rafael Marrero would have been there on the very streetcorner where the shots were fired, but both made a last-minute decision to be somewhere else.

"It is a worry in the back of my head because I was pretty close by to the situation," Marrero said. "That could have been me."

Police say Ryan had no criminal record when he opened fire just after school let out. He was arrested Saturday at home.

He is now charged with murder, attempted murder, manslaughter, and two counts of criminal weapons possession. He is presently charged as an adult, but it's possible the case could be moved to Family Court, with a decision pending later this week.

"We need safe corridor programs," Weingarten said. "We need more safety agents in schools, and we need to get ghost guns and other guns off the streets."

The Biden administration on Monday announced that the Department of Justice will expand the definitions of "firearm," frame," and "receiver" so that more guns are subject to federal laws.

Speaking at the White House, Biden highlighted the Justice Department's work to finalize new regulations to crack down on ghost guns, and announced the nomination of Steve Dettelbach, who served as a U.S. attorney in Ohio from 2009 to 2016, to run the Bureau of Alcohol, Tobacco, Firearms and Explosives.

"Law enforcement is sounding the alarm," Biden said of ghost guns, briefly holding one up for cameras to see in the Rose Garden. "Our communities are paying the price."

The new rule will require dealers who acquire guns with no serial numbers to give them those numbers so they can be traced.

And those dealers will now have to keep their records for as long as they remain in business.

In New York City, activists are also calling for the Department of Education to hire more school safety agents after the de Blasio administration removed thousands of those unarmed cops from schools last year.

"We need help, serious help, and no one's listening," parent and school safety agent Quiann Simpkins said. "The politicians are playing political football with our children."