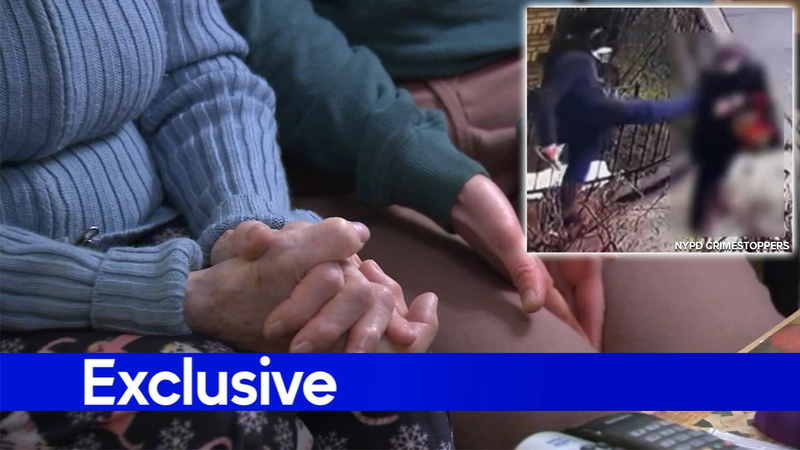 Exclusive: 89-year-old woman speaks out after being kicked in Brooklyn

MIDWOOD, Brooklyn (WABC) -- Police in Brooklyn are looking for the heartless person who kicked a senior to the sidewalk.

Authorities say the incident happened around 7 a.m. on Friday near Avenue P and East 17th Street in Midwood.

Video released by police shows the 89-year-old woman standing on the sidewalk when a man walked up to her and kicked her in the back.

The victim, named Ludmylla, stumbled to the ground.

Police say she suffered pain and bruising to her head and body.

She was later taken to Maimonides Hospital in stable condition.

Ludmylla is so frightened now, she's afraid to go outside again.

"She didn't know what happened. She felt a hard knock, somebody knocked her over and she is on the ground," Ludmylla's granddaughter said.

She will be 90 years old in June. Ludmylla loves to dance and play cards with friends at a nearby community center.

She didn't want Eyewitness News to show her face. She's still frightened of the man out there who did this.

The suspect fled on foot in an unknown direction.

He's described as 20 to 30 years old and was last seen wearing dark clothing.

She says her grandmother had been waiting for a car to take her to the community center when the man attacked.

Despite the attack, she doesn't want to slow down because of this, and she certainly hasn't lost her feel for life at 89 years old.

She says she'll be more comfortable going out again when the man who did this is behind bars.

Anyone with information in regard to this incident is asked to call the NYPD's Crime Stoppers Hotline at 1-800-577-TIPS (8477) or for Spanish, 1-888-57-PISTA (74782). The public can also submit their tips by logging onto the CrimeStoppers website at WWW.NYPDCRIMESTOPPERS.COM, on Twitter @NYPDTips.