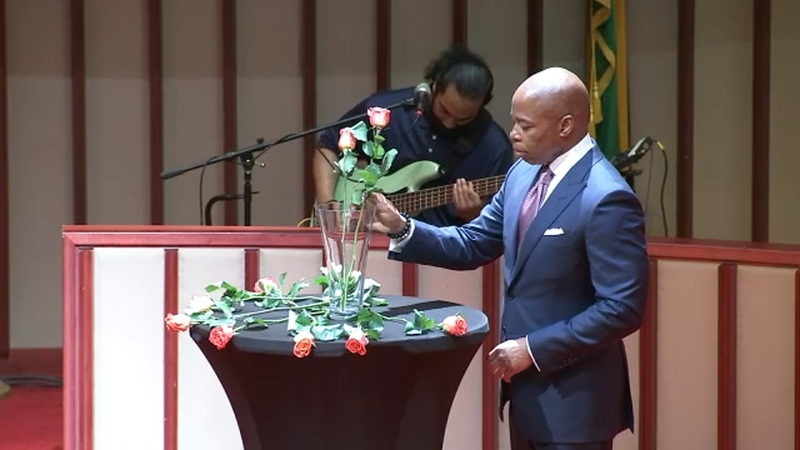 NEW YORK CITY (WABC) -- Officials in New York City are responding to the horrific supermarket massacre that happened over the weekend in Buffalo.

Mayor Eric Adams and other faith leaders held a vigil at Bethel Gospel Assembly Church in Harlem Monday evening honoring the victims of the attack.

The message at the vigil was that only a united community can defeat the kind of hatred that took so many lives in Buffalo.

A grim parade of 10 of the city's faith leaders laid a flower on a table for each of the victims of the weekend's mass shooting.

When the mayor arrived, he placed the flowers in a vase. He said he's pained by all the violence he sees around him.

"If you were to close your eyes and listen to the mourns in Buffalo who lost their loved ones you would not be able to distinguish between the two different groups, because pain is pain, and the premature taking of the life of an innocent person is felt and it doesn't dissipate based on where you are geographically or who the person is that took your loved one," the mayor said.

The mayor was called for more changes to gun laws and pointed out how easy it was for someone so full of hate to acquire a weapon that could destroy so many lives. He also demanded that social media companies take action against those spreading hate.

"He was recruited online based on that manifesto," Adams said. "And we need to take that as a teaching moment, to say what it taught to people who are dealing with these issues."


On Monday morning, New York Governor Kathy Hochul said it's time to take a closer look at where the radical hate speech is coming from -- speech "which has not been called out enough, in my opinion, by elected leaders across this nation."

"There are theories, racist theories, that are being perpetrated on literally some the cable news networks, that people are absorbing," she said.

Meantime, at the vigil, the Bethel Gospel Assembly community prayed for residents nearly 400 miles away, whose pain feels somehow close to home.

"That's a lot of families that have been impacted," said Ruth-Ann Wynter, Executive Pastor of the Bethel Gospel Assembly. "And even if you were not shot, wounded or killed, if you were in the store... the workers, the staff... that's a traumatic experience."

People of all faiths and backgrounds were welcome to attend the vigil.

It comes amid an increased police presence at predominantly Black houses of worship.

The NYPD says there is no active, specific threat, but deployments have been ordered out of an abundance of caution.