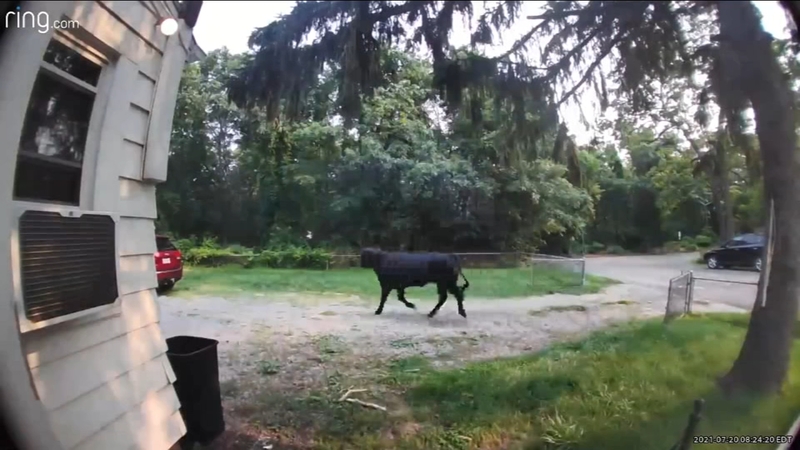 Runaway bull shuts down NY highway, still on the loose

MASTIC, Long Island (WABC) -- A bull on the loose briefly shut down a Long Island highway Tuesday morning, and authorities are continuing to search for the animal.

The bull was first spotted on Montgomery Avenue in Mastic around 8:30 a.m., and it then wandered onto Sunrise Highway near Exit 58 before 10 a.m., closing down the roadway in both directions.

It is believed to have escaped from a slaughterhouse on Barnes Road, and the bull was supposed to be sacrificed as part of the celebration of the Muslim holiday Eid al-Adha.

It's customary on the holiday for people of the Muslim religion to sacrifice livestock.

After months of decline amid soaring vaccination rates, coronavirus cases are once again on the rise in the Tri-State area.

Tasbir Ahammed, of East New York, was attending the ceremony when the bull got loose.

Ahammed said about 50 people were attending the ceremony and a few got injured trying to run away from the bull, and he added the same thing happened last year at the slaughterhouse on Eid al-Adha.

Shiful Islam said he was getting out of his car for the ceremony when the bull came charging at him.

Islam showed Eyewitness News reporter Kristin Thorne scrapes on his wrist and finger from slipping as he was trying to run away from the bull.

Deborah Popp said she saw the bull run by her house on Montgomery Avenue in Mastic.

She was sitting in her living room and saw the bull zip by her front window.

"It's just crazy to see a cow going down the block," she said.

Suffolk police had at least 10 patrol cars out on Tuesday afternoon looking for the bull, but it had not been spotted into the evening.

A TSA team from JFK Airport reunited a traveler with a newly purchased diamond that went missing from her engagement ring.

Police are advising residents in the area to stay inside, and anyone who sees the animal is urged not to approach it or shoot at it.

Once the bull -- which is believed to weigh as much as 1,500 pounds -- is found, it will be tranquilized and hopefully taken to an animal sanctuary in New Jersey.