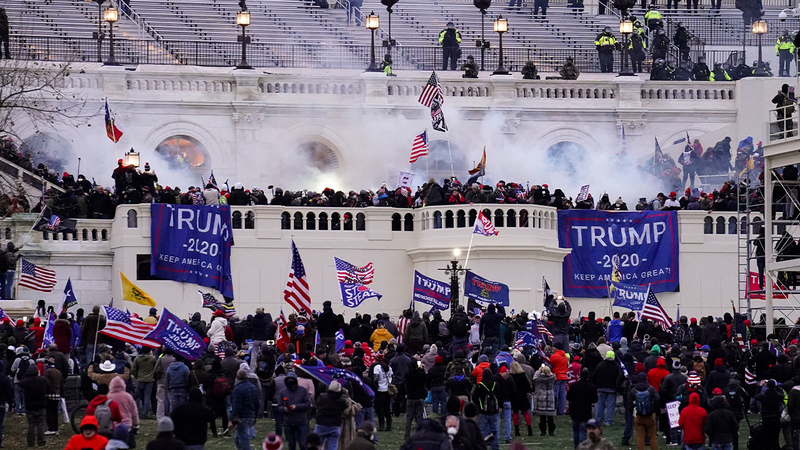 NEW YORK (WABC) -- Two men wanted in the deadly riot at the Capitol were arrested over the weekend, including one who reportedly served as a bodyguard to former President Donald Trump's longtime political confidant Roger Stone, federal authorities said Monday.

Roberto Minuta, a Newburgh tattoo parlor owner, has been arrested in connection with the Capitol riot, a law enforcement official told ABC News.

A member of the Oath Keepers, Minuta was seen on video guarding Roger Stone the morning of January 6 outside a Washington D.C. hotel.

Minuta, 36, of Hackettstown, New Jersey, had been "equipped with military-style attire and gear, including apparel emblazoned with a crest related to the Oath Keepers," the FBI said, referring to the far-right antigovernment militia.

He was armed with pepper spray or bear spray that day and federal prosecutors said he was "spoiling for a fight." Prosecutors said it's clear he was coordinating with other Oath Keepers on the day itself.

He is charged with Obstruction of Congress and Unlawful Entry.

"Minuta and others affiliated with the Oath Keepers breached the U.S. Capitol grounds, where Minuta aggressively berated and taunted U.S. Capitol police officers responsible for protecting the Capitol and the representatives inside of the Capitol," according to court records.

When he left the Capitol, he said, "all that's left is the Second Amendment." He has 10 registered firearms.

A week later, the FBI said, Minuta deleted a Facebook account he had maintained for 13 years to conceal his involvement.

Stone, whose sentence for several felony charges was commuted by Trump, was in Washington the day of the assault but has denied any involvement.

Also arrested over the weekend was Isaac Steve Sturgeon, 32, of Dillon, Montana, who is charged with shoving a metal police barricade into police officers during the insurrection, according to court records.
Authorities said he was identified through body-worn police camera and photographs posted to social media.

The FBI said Sturgeon, who owns a lawn care business, traveled to Kenya on Jan. 24 and was deported from that country to New York. He was arrested Saturday at John F. Kennedy International Airport.

A message was sent to his defense attorney seeking comment.

At least five people, including a Capitol Police officer, died as a result of the violence at the Capitol, and two other officers killed themselves after. More than 300 people have been charged with federal crimes.