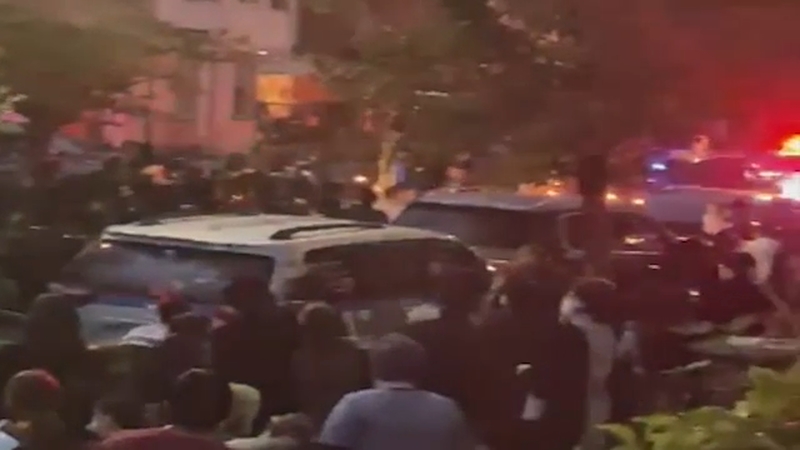 People who refuse to wear masks will be fined in NYC

NEW YORK CITY (WABC) -- There are now 10 neighborhoods in New York City where cases continue to grow at an alarming rate, outpacing the citywide average by 3.7 times over the past 14 days, according to the health department.

Fresh Meadows/Hilcrest has been added as the neighborhood that has surpassed 3% positivity. The 10 are the only neighborhoods in New York City with positivity rates above 3%.

Five of the 10 neighborhoods saw increases even from the prior day's report, based on the health department's preliminary data. The areas account for over 27.5% of new cases citywide over the past 2 weeks despite representing 7.5% of the city's overall population.

In addition to these 10 neighborhoods, health officials have identified seven additional neighborhoods, now including Williamsburg, Crown Heights (East), Bedford-Stuyvesant (West)/Clinton Hill/Fort Greene, and Hillcrest/Jamaica Estates/Jamaica Hills, which are showing increased growth of cases and test positivity between 2% and 3%.

Six of the 7 areas above have also increased in the percent of positive tests since the day before, according to preliminary data.

No one was fined for mask refusal on the first day of a promised crackdown in a handful of New York City neighborhoods that have seen a spike in coronavirus infections, Mayor Bill de Blasio said Wednesday.

"We saw good compliance," de Blasio said. "When folks were encountered, when there was a discussion, we saw a very high level of compliance. No summonses were necessary yesterday."

Many of the neighborhoods in New York City and elsewhere in the state where rising rates of positive coronavirus tests have been reported are Orthodox Jewish strongholds, and both de Blasio and Gov. Andrew Cuomo have said they are meeting with leaders of those communities to stress the importance of complying with coronavirus guidelines. But Cuomo appeared to disparage New York City's effort to contain the virus by distributing masks in the neighborhoods where cases are rising.

The mayor and governor, both Democrats, have had a testy relationship for years and have frequently sniped at each other during the pandemic.

In Borough Park, Eyewitness News was told by a person involved in a mass gathering in Brooklyn that this was a religious ceremony for a new Torah. The group, of about 150 to 200, were escorting the Torah from a private home to synagogue. The person said 80 to 90 percent of the people were wearing masks and the video looks more "pushed together than it really was."

The group walked from 11th Ave and 58th Street to 12th Ave and 57th Street at around 6:30 p.m. Tuesday night. The procession took about 15 minutes.

New York City reached a recovery milestone on Wednesday, meanwhile, as indoor restaurant dining was permitted for the first time since March, albeit with restrictions including a limit of 25% of capacity and mandatory temperature checks.

De Blasio said restaurant inspectors would focus on eateries in the neighborhoods where the infection rates have risen.

"There's going to be a very rigorous inspection effort in those ZIP codes," de Blasio said. "And we're going to be looking carefully to make sure every restaurant is following the rules."

Cuomo said that New York has 5,000 state troopers which is not enough for him to enforce the mask law in New York City. The governor said that the city has 35,000 NYPD officers and that he would need the local government to assign a number of their police to task force, "and I will enforce it with the task force because that will save lives."

If enforcement efforts with social distancing and mask-wearing don't work, the Mayor de Blasio said there will be more stringent measures taken, including closing down non-essential businesses and banning public gatherings larger than 10 people.

About 300,000 public elementary school students returned to classrooms Tuesday. Middle and high school students report by the end of the week. About half of all public school families opted into in-person learning and the other half opted to keep kids home for remote learning.

So far, the Teacher's Union says that they've had more than 100 teachers and 10 students test positive.

Mayor de Blasio noted that nine zip codes are experiencing most of the increases. And on Wednesday, six of the nine continued to see increases.
EMBED More News Videos