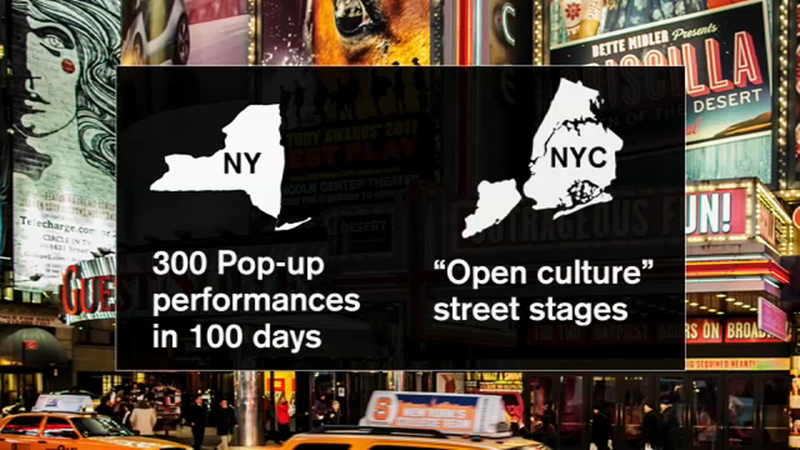 NEW YORK (WABC) -- Governor Andrew Cuomo on Monday announced a series of pop up performances called NY PopsUp to bring the arts back.

It will include 100 days of 300 free pop-up performances across the state.
EMBED More News Videos

NY PopsUp hopes to help revive the arts due to the COVID-19 pandemic.

"They are free, not designed to be pre-scheduled and draw a crowd, because we actually don't want the crowd," Cuomo said.

However, everyone will get a chance to see the performances, as the events will then be shown online.

"Cities have taken a real blow during COVID, and the economy will not come back fast enough on its own - we must bring it back," Cuomo said. "Creative synergies are vital for cities to survive, and our arts and cultural industries have been shut down all across the country, taking a terrible toll on workers and the economy. We want to be aggressive with reopening the State and getting our economy back on track, and NY PopsUp will be an important bridge to the broader reopening of our world-class performance venues and institutions. New York has been a leader throughout this entire pandemic, and we will lead once again with bringing back the arts."

These will be the very first indoor performances since the pandemic began. The state called the pop ups a key step in the long process of getting tens of thousands of arts professionals around New York State back to work -- and a bridge to getting Broadway and all of the New York cultural world open.

These Flex Venues are established performance spaces without fixed seating and are thus able to be adapted for social distancing. Examples of these venues would include the SHED, The Apollo, Harlem Stage, La MaMa, and the Glimmerglass Festival's Alice Busch Opera Theater. All indoor events will strictly follow Department of Health public health and safety guidance.

"When you shut down Broadway, when you shut down movie theaters, you stop an entire industry," Cuomo said. "We have to now nurture that industry to bring it back. It is vital for our city to survive, the arts industry workers, many have been out of work since March. So we are going to accelerate that reopening with 300-plus pop up arts events."

Opening day is February 20, when the members of the Artists Council will lead a performance at the Javits Center.

During the run of the festival, NY PopsUp will grow in its scale, volume of performances, and geographical footprint, with events throughout New York State, from the Bronx to Staten Island, from Buffalo to Suffolk County, from the Hudson Valley to the Capitol.

The performances will crescendo through the summer to the 20th anniversary of the Tribeca Film Festival and the opening of Little Island at Pier 55.

The idea for Little Island, a soon-to-open, first-of-its-kind public park on the Hudson River that merges nature and art, was dreamt up as a solution to repair and reinvigorate New York's West Side after the destruction wrought by Superstorm Sandy.

The city also announced two new programs to aid the industry, including the "Open Culture" program, which is the same concept as open streets and open restaurants where streets closed last summer and fall to make way for tables and chairs.

Now, more than 100 city blocks will close to make way for street performances.