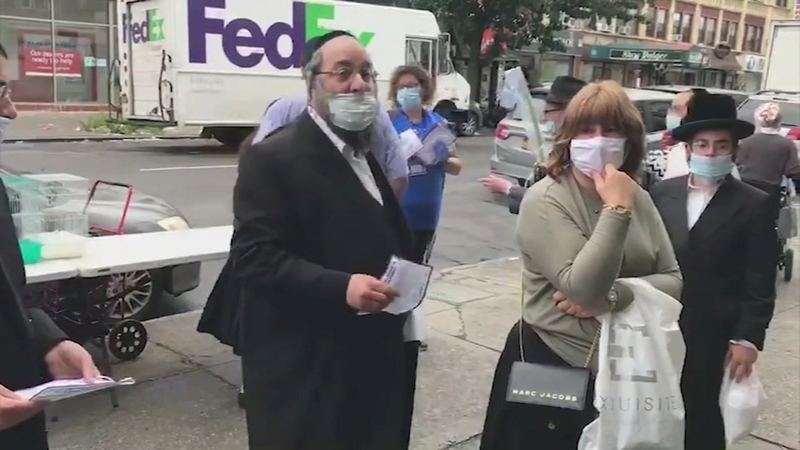 NEW YORK CITY (WABC) -- As New York grapples to get a hold on spiking hot spots of COVID-19, some religious groups continue to take a stand against the state's latest restrictions.

A court hearing took place Thursday for Brooklyn's Catholic Diocese which is fighting to reopen 28 churches. Meanwhile, three Rockland County Jewish congregations have filed a lawsuit accusing Gov. Andrew Cuomo of engaging in a streak of anti-Semitic discrimination with a crackdown on religious gatherings.

Cuomo's statements and actions were painful for residents in an area north of New York City where a man invaded a Hanukkah celebration in December and stabbed or slashed five people, the lawsuit said. Grafton Thomas awaits trial after pleading not guilty.
EMBED More News Videos

Marcus Solis reports on the lawsuit filed against the governor.

The attack occurred in Monsey - near the New Jersey state line about 35 miles (56 kilometers) north of New York City - where two congregations in the new lawsuit are based.

In the past two weeks, New York City has tested 32,000 people in the cluster zones and has added 32 testing sites in Brooklyn and Queens. The positivity rate in those areas is hitting a plateau, Mayor Bill de Blasio says.

"We do see, again, these results indicate some leveling off some improvement and all these grassroots efforts, all the education, all the facemask distribution and the enforcement," de Blasio said.

He says since the beginning of October, the city has inspected 18,000 businesses and institutions and handed out 288 tickets for public health violations.

But Cuomo says the city has not been tough enough, especially with yeshivas.

"If a yeshiva is open, you can tell because you see school buses with children in them," Cuomo said.

The governor on Wednesday said schools are not childcare centers.

The mayor on Thursday indicated the city hasn't shut down some yeshivas because he needs more clarity.

"There is a grey area that we are waiting for more guidance from the state," Mayor de Blasio said.

But some in the Orthodox Jewish community continue to protest the restrictions and they say their neighborhoods are being singled out.
EMBED More News Videos

NJ Burkett reports on the backlash following the governor's threat to pull funding from cities who disobey COVID restrictions.

The new measures announced Oct. 6 have resulted in temporarily limiting the size of religious gatherings in the COVID-19 hot spots to 25% capacity, or a maximum of 10 people.

"For some of these organizations they had never been following the rules never and there has never been enforcement and they find this jarring," Cuomo said.

Cuomo, who has said he has "respect and love" for the Orthodox community, told reporters Thursday that he was not targeting Orthodox Jewish communities. He said red zones are based on addresses of residences where more individuals are testing positive for COVID-19.

The Brooklyn Diocese is also suing the state of New York for limiting the number of people inside its churches.

"We've compiled, the people in our community are safe, so we should not be held accountable because the governor is upset some people in the community are not wearing masks," an official said.

It had an expedited hearing Thursday in federal court to challenge the city's restrictions on religious gatherings, arguing they're unconstitutional.

"If you can go into Target and there's no cap on the number of people who go into Target, why are you capping how many people can come into one of our churches?"