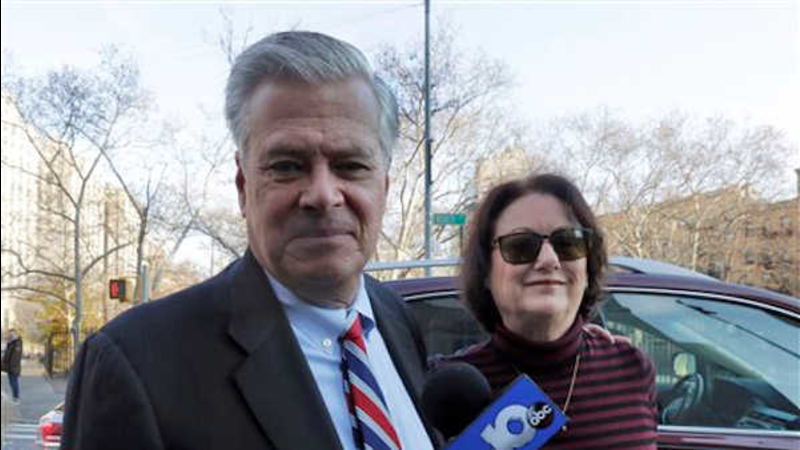 NEW YORK -- Former New York Senate leader Dean Skelos and his son were convicted Friday of charges the once-powerful Republican used his clout to extort about $300,000 income and other benefits for the son in a bribery scheme that unraveled when investigators began recording their phone calls.

The trial of Skelos, 67, and his 33-year-old son, Adam, was the second closely watched public corruption case in recent weeks to cast a harsh light on politics-as-usual in Albany. In the first, former Assembly Speaker Sheldon Silver was convicted on Nov. 30 of bribery.

The government had accused the elder Skelos of strong-arming three companies with a stake in state legislation - a major real estate developer, an environmental technology company and a medical malpractice insurer - into giving work to a son prosecutors portrayed as an underachieving only child whose sense of entitlement knew no bounds.

In closing arguments, Assistant U.S. Attorney Jason Masimore drew an analogy to the poem "Gorilla" by Shel Silverstein, about a boy who discovers he can get away with anything when he brings his giant pet gorilla to school.

"Did Adam deserve these things, earn these things? No," the prosecutor said. "They didn't want Sen. Skelos to unleash this gorilla."

The defense had argued that the tapes and other evidence showed only that Dean Skelos was looking out for his son like any loving father, and that overzealous prosecutors were overreaching.

"Senator Skelos did not sell his office," the senator's lawyer, G. Robert Gage, said in his closing. "You can be a state senator, and you can be a father."

Gage argued that prosecutors offered no evidence proving Skelos changed long-standing positions on legislation so he could reward the businesses that employed Adam Skelos.

"There was no quid pro quo - ever," he told jurors. "Nothing was traded here."

Sentencing for Dean and Adam Skelos is March 3.

At trial, prosecutors used the tapes to try to demonstrate that the father and son had a blatant disregard for conflicts of interest that rose to felony crimes, and that they were aware they could get caught. In one tape, Skelos could be heard advising his son about the need for discretion amid the state capital's ongoing corruption scandal, saying, "Right now we're in dangerous times, Adam."

The exchange was further evidence of a father-son conspiracy that threatened to erode the public's faith in honest government, Masimore said.

The prosecutor cited evidence that Dean Skelos, while traveling to a funeral for a slain New York City police officer in January, confronted the Nassau County executive about money the county owed to a company that hired Adam Skelos as a consultant. The senator later called his son to tell him, "All claims that are in will be taken care of," using code language to try to cover his tracks.

Last week, Anthony Bonomo, the chief executive of the insurance company, testified that after he put Adam Skelos in a $78,000-a-year position in 2013, the son rarely reported for work. Bonomo claimed he was under pressure by the elder Skelos to keep his son on the payroll, even after the son threatened to smash in the head of his supervisor.

The defense countered by arguing that Bonomo and others who independently decided to help Adam Skelos because they believed employing the son of an Albany power-broker would make them more money. They also attacked his and other witnesses' credibility by accusing them of falsely portraying themselves as victims of extortion to avoid being prosecuted themselves.