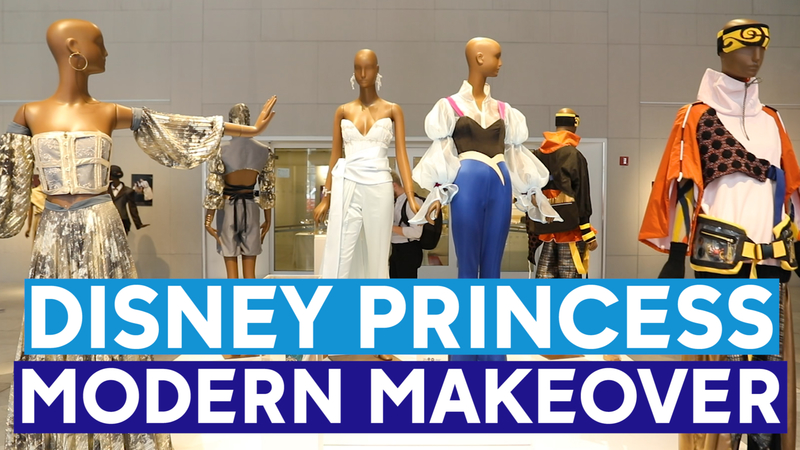 NEW YORK CITY (WABC) -- Disney is celebrating 25 years on Broadway by partnering up with the Fashion Institute of Technology (FIT) for a magical design challenge!

For the first time in forever, some of our favorite princesses are getting a major wardrobe update - one that the actors who play the roles on Broadway are excited about.

Nearly 100 sketches were submitted reimagining Disney heroines with contemporary looks. 10 students were selected as finalists to participate in the final challenge and bring their sketches to life.

ABC7 got an exclusive tour of the new exhibit featuring leading ladies like Frozen's 'Princess Anna' to The Lion King's 'Nala'.

"Ariel would have LOVED this!" said Sierra Boggess, who played 'Ariel' in the Little Mermaid on Broadway. "These are the costumes though that would have made Ariel want tp stay in the sea!"

Other Disney on Broadway stars showed up to gaze at the magical wardrobes, like Ryann Redmond, who currently plays 'Olaf' in Frozen on Broadway. As well as Arielle Jacobs ('Jasmine' in Aladdin), Kara Lindsay (previously in Newsies), and Jenn Gambatese ('Jane' previously in Tarzan).

"I am impressed with my designer's execution," said Gambatese.

A few weeks ago, two of the finalists had the chance to see Frozen the Musical on Broadway.

Yelayny Placencia, a Senior at FIT originally from the Dominican Republic, designed sketches for 'Princess Anna'.

"I see Anna as very independent, very out there... so I see her going out there with a pant and a sexy slit," said Placencia.

"I just really like Elsa's personality. This was the biggest inspiration for my garments," said Moogi. "The actual costume Elsa wears onstage is explosive and we had to derive that into a more contemporary approach that she would wear on the streets of New York or to a high Gala because Elsa is a queen at the end of the day!"

The two finalists each had the opportunity to meet Patti Murin, who plays 'Anna', and Caissie Levy who plays 'Elsa', backstage before the show to reveal their sketches to the actresses.

When seeing 'Anna's' sketches for her modern costume for the first time, Patti Murin said, "That is such a strong silhouette that I feel captures how I feel Anna is and how she behaves for this entire story."

"The reason I am here today is all due to FIT. The skills that we learn through our Associate's Degree and Bachelor's Degree, and the professor's experience in the natural world, put us down to business," said Moogi.

The student finalists, who are from all over the world, will have their garments on display in an exhibition at FIT's Art & Design Gallery in New York City from September 19th, 2019 through October 13th, 2019.