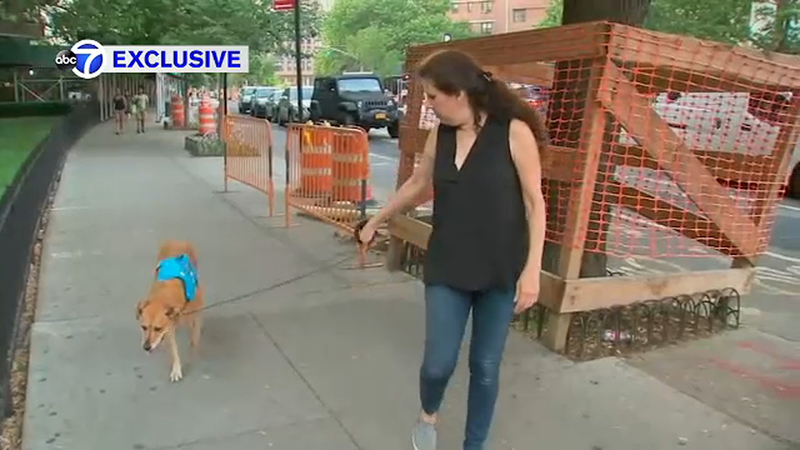 LOWER EAST SIDE, Manhattan (WABC) -- In an Eyewitness News exclusive, a woman in Manhattan is warning about the danger of dogs on the street, unleashed.

She and her dog were attacked last week on the Lower East Side by a very large dog whose owner was not holding the leash.

"The guy said, 'Oh my dog is friendly', he went right at her. We didn't stand a chance," said Annette Frey.

Last Wednesday night. Annette was walking her beloved Starr on the corner of Clinton and East Broadway when they crossed paths with a huge dog.

She says a split second after the owner claimed his dog was friendly, the dog had its teeth on Starr's midsection. There was screaming and crying. Eventually, the other owner and his attack dog ran off

"Not all owners are responsible, clearly," she said.

Annette was able to take one photo in the chaos showing how big the dog was. She has posted fliers around the Lower East Side neighborhood asking for help

Mason Rasqiewicz says the same dog tried to attack his pet Brooklyn on July 4th. He said the other dog was on a leash but the owner wasn't holding the leash, letting the dog run wild.

"The dog was chasing my dog trying to bite it on the back side," he said.

As for 13-year-old Starr, she suffered a puncture wound and internal injuries. $400 later in vet bills, she is now on antibiotics, compresses, and a lot of love.

Annette also got a small wound when she was trying to save Starr's life. She reported the incident to police but was told they do not investigate dogs off leash.

So nervous owners in the neighborhood are left keeping an eye out for a large aggressive pet, perhaps a St. Bernard/Akita mix, hoping the dog does not attack again.