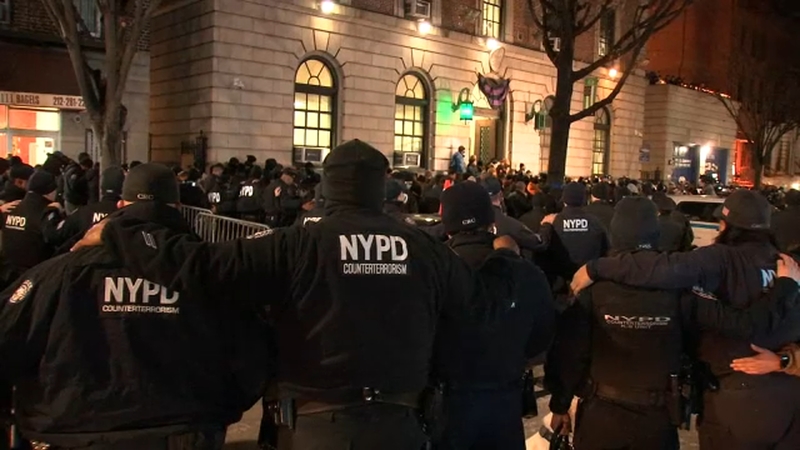 NEW YORK -- The two New York police officers who were shot, one of them fatally, inside a Harlem apartment on Friday were responding to a domestic disturbance call, one of the most dangerous circumstances for police, experts say.

According to data from the FBI's Law Enforcement Officers Killed and Assaulted (LEOKA) database, 503 officers nationwide were feloniously killed between 2011 and 2020.

The 43 officers who were killed while responding to domestic disturbance or domestic violence calls account for roughly 8.5% of the total number of officers killed between 2011 and 2020.

Last year saw the highest number of law enforcement officers who were intentionally killed in the line of duty since the terrorist attacks of Sept. 11, 2001.

There were 73 officers who died in felonious killings in the line of duty in 2021, according to preliminary year-end data provided to CNN by the FBI. It was the highest total recorded by the agency since 1995, excluding the 9/11 attacks.

The Friday incident unfolded as officers were responding to a domestic call at 6:15 p.m. in Harlem, officials said. A woman called 911 and reported she was having a dispute with one of her sons inside her apartment, said NYPD Chief of Detectives James Essig.

Shortly after, three NYPD officers arrived at the apartment and met the mother and another son. At some point the officers were directed to a room in the back of the apartment, where her other son -- the suspect -- was waiting, Essig said.

"The door swings open and numerous shots are fired, striking both officers -- one fatally and one is here at Harlem Hospital in critical condition," Essig said.

A third officer shot the suspect, identified as Lashawn McNeil, in the arm and head when he tried to escape, police said. McNeil, 47, was in critical condition at the hospital, officials said.

Several factors can make a domestic violence incident highly dangerous for responding officers, according to Jon Shane, a professor in the Criminal Justice department at John Jay College of Criminal Justice.

"The first is that you are entering into someone's private domain and you're bringing a very public face to a very private matter," Shane told CNN. "People's emotions are already elevated due to whatever dispute they're involved in and now you bring the coercive power of the state, people are angry and angry to see you, knowing that there's potential to be arrested and incarcerated."

Shane said officers are also on "unfamiliar ground," unlike the other individuals who likely know the layout of the residence.

"You don't know whether there are any weapons in that house, so you are at a complete disadvantage. You are 100% on defense, while the other players are on offense," Shane added.

Shane said the NYPD officers did not establish control over the situation as quickly as possible because the individuals at the scene were in different rooms rather than in one place.

Many factors increase danger for officers

A 2017 research brief from the Dolan Consulting Group, authored by criminal justice researcher Richard Johnson, determined the likelihood of an officer assault while responding to domestic violence calls "is greatest when the batterer is unemployed, intoxicated, resides with the DV victim, has just damaged property, and displays a hostile demeanor when officers arrive" and is least likely when these factors are not present.

"While DV calls may not be the most dangerous duty that officers face, it is inaccurate to say these calls are by any means safe - and it is therefore vitally important to work to understand the factors that increase risks to officers," Johnson wrote in the brief.

According to Christopher Herrmann, an assistant professor at John Jay, domestic calls can escalate rapidly as they approach a confrontation already in progress.

Herrmann said alcohol is frequently involved in domestic violence incidents and when there is a weapon at the scene it's a "perfect storm for disaster to happen."

Officers become on high alert when they get a radio call for domestics and emotionally disturbed people (EDP), Herrmann said. Mental health issues, domestic disturbance or relationship issues are more complex situations in which emotions run high, he said.

"The fact that the cops are there to begin with shows you the extremeness of the case," Herrmann said. "Someone either inside the house or one of the neighbors got so worried that they call the police and then something can light the fuse that sparks a fire that gets out of control pretty quickly."