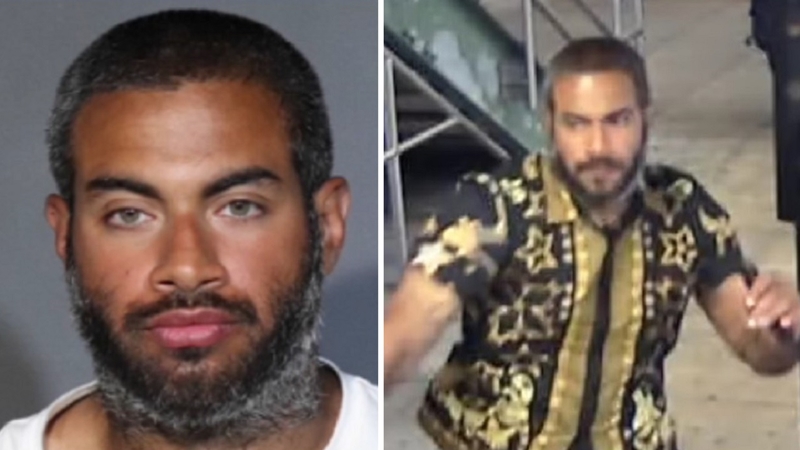 LONG ISLAND CITY, Queens (WABC) -- Chilling details are being released about the man arrested in connection with a pair of subway stabbings a few stops apart on the 7 train in Queens.

Donny Ubiera, 32, was arrested Saturday and charged with two counts of attempted murder, assault and criminal possession of a weapon.

He was also charged in connection with an assault at a Queens bakery last Wednesday, in which he allegedly used a nail-embedded board to strike a man inside the business. He was also arrested that day for allegedly threatening police officers and others with a knife. 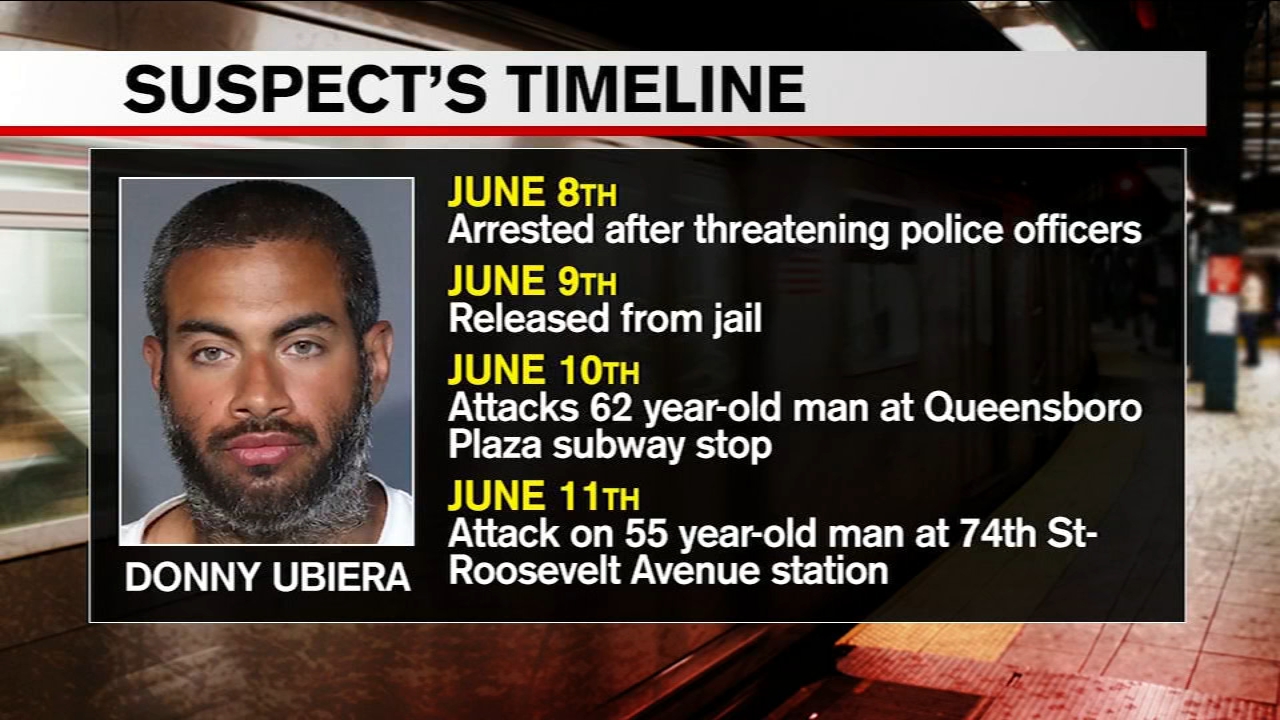 He was ordered held without bail after the stabbings.

"Sanity prevailed when a judge decided today to detain a defendant accused of multiple attacks on subway passengers," MTA Chairman and CEO Janno Lieber said. "It is not acceptable that someone who's a clear danger could threaten a police officer with a knife one day and be put back on the street by the justice system the next day to stab others as happened here. Thanks to Queens DA Melinda Katz for aggressively pushing to protect New Yorkers."

Katz said that Ubiera, of Bayside, began his spree around 10:45 a.m. Wednesday, when he allegedly approached a man from behind as he entered the bakery near Warren Street and Roosevelt Avenue. Ubiera was allegedly holding a board with a nail protruding from it in one hand and a rock in the other and yelled for the man to "come outside and fight me."

The victim attempted to evade Ubiera by running behind the bakery counter, authorities said, but Ubiera allegedly reached over and struck him on the head with the nail-embedded board.

The victim was treated at an area hospital.

Police say Ubiera fled the scene, and later, officers were called to a report of a man menacing people with a knife. When they responded, he allegedly refused to drop it.

He again fled on foot, police said, before being apprehended nearby. He was said to be in possession of a pipe with crack residue at the time of his arrest.

At this point, police had not yet linked him to the bakery assault.

Then, at 8:40 a.m. on Friday, June 10, Katz said Ubiera stood over a man as he sat on a bench waiting for a train at the Queens Plaza subway station.

The victim was looking at his phone when he realized the man was hovering over him and heard something drop to the floor.

The victim spotted the knife, and that is when Ubiera allegedly picked it up and mumbled something inaudible before stabbing and slashing the man.

The victim raised his hands to protect himself and sustained numerous cuts and slash wounds to his hands, fingers and face.

Police said Ubiera fled the scene but was observed by two officers throwing two cellphones, one of which belonged to the victim.

The victim was taken to a local hospital where he required 36 stitches to close his wounds.

The following day, around 7:15 a.m. at the 74th Street and Roosevelt Avenue subway station, authorities say Ubiera approached a group of four to five people waiting for the train.

Again, without provocation, Ubiera allegedly stabbed one of the men from behind and fled.

A family is searching for answers after a 21-month-old girl tragically died at a daycare center in New Jersey.

"The guy just came up randomly, suddenly, and not in a language I understand, and he stabbed me," he said. "Then everybody gets excited. I was bleeding like a river."

Walton was taken to a local hospital and treated for a stab wound to his neck, and he required two life-saving surgeries in order to repair the damage from the puncture wound.

Ubiera was later arrested on Utopia Parkway in Whitestone by detectives who recognized his image from video surveillance footage.

"The subway system provides a crucial lifeline to millions of New Yorkers, and the safety of our riders is paramount," Katz said. "As alleged, the defendant began his three days of terror by violently attacking a man inside a bakery, before going on a rampage inside the transit system and repeatedly stabbing two straphangers without provocation over the course of two days."

Ubiera has 22 prior arrests, with three felony convictions and 11 misdemeanor convictions.

Ubiera was last arrested on January 8, charged with robbery and criminal possession of a weapon inside a bodega. He allegedly stole a 24-ounce can of Heineken beer, and when approached by a worker, police say he pulled a large knife and menaced the worker.

On December 27, police say he was arrested for four different attacks in one day, including for assaulting two employees at a Duane Reade in Manhattan.

Walton says it's an outrage.

"I think it's unfair, because if he was locked up, this wouldn't happen to me or somebody else," he said.

"My brother could have lost his life now, and then what the judge going to say?" he said. "He didn't do nothing. So you have to wait for him to kill somebody before you could get him the next day."

Lieber says the case of is an example of what's wrong with criminal justice in New York.

"We have a serious problem," he said. "The same people keep attacking and menacing riders again and again and again, and we're saying, yes, it's time that the justice system put some of these people away to protect New Yorkers from what they may do."