The owner of the Empire Diner in New Jersey jumped into action Saturday to save a choking customer.
WPVI 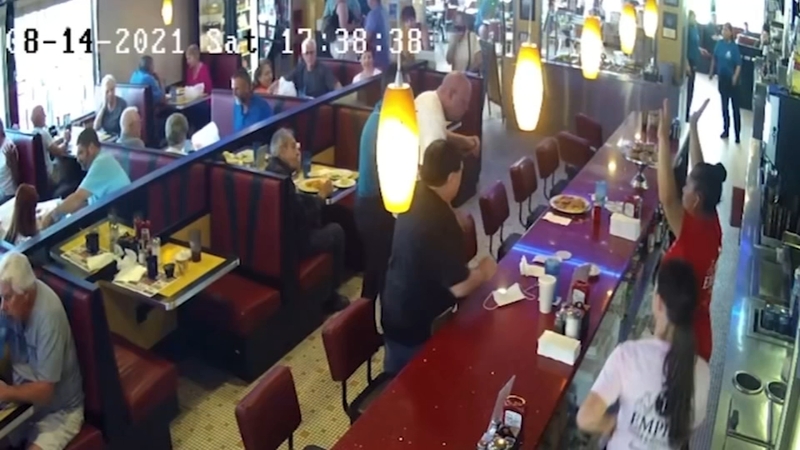 NEW JERSEY -- A terrifying rescue was caught on surveillance video at the Empire Diner in New Jersey Saturday evening.

The video shows the diner owner, Dervis Akturk, quickly springing into action when he realized one of his regular customers was choking on chicken parmesan.

"I was praying, 'Please Lord, please God," Akturk said. "But thank God I was in the right place at the right time."

Akturk said the customer comes for dinner at least several times a week. But this particular night, Akturk said he was on his cellphone searching for a cook when he heard his name being called. At first, the customer's friend, who was with him, tried to help.

"I just saw him hugging him like trying to save him, so I just take over. I said, 'Let me do it,' and by that time nothing was going through my mind. I just wanted to save his life," Akturk said.

While Akturk feared things could have taken a turn for the worst, he remained calm and focused. He said the saving grace is that he learned both CPR and the Heimlich maneuver when he was in college. But the entrepreneur never had to put those skills into practice until this weekend.

A community activist from Elizabeth, New Jersey is urging people to get the COVID vaccine and using his own story as a cautionary tale.

Akturk said the diner is his entire world and all of his customers are like family.

"That day I was able to save someone's life. That is an amazing feeling," he described.