2 injured after car launches through parking lot, crashes into Wendy's in New Jersey 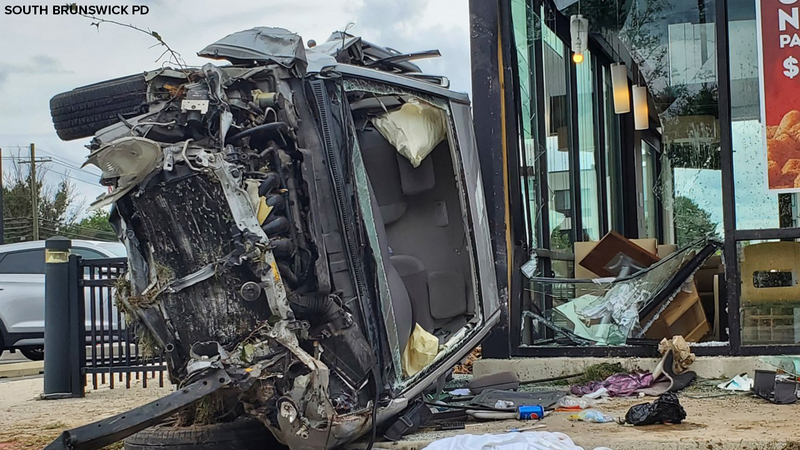 SOUTH BRUNSWICK, New Jersey (WABC) -- Two people were hospitalized after a driver suffered a medical emergency and crashed into a Wendy's restaurant in New Jersey.

Police say the incident occurred around 1 p.m. on Route 130 in South Brunswick.

They say a 2008 Toyota Corolla was headed southbound near Melrich Road when it left the roadway, drove across the grass, struck a berm at a Wendy's restaurant and became airborne.

Eyewitness News obtained exclusive surveillance video of the crash which showed the car launch through the parking lot before colliding with a 2017 Audi that was sitting in the drive thru.
EMBED More News Videos

Eyewitness News obtained exclusive surveillance video of the crash which showed the car launch through a Wendy's parking lot before colliding with an Audi sitting in the drive thru.

The impact and momentum of the crash pushed both vehicles into the restaurant and outside tables.

A teenage boy has died after being struck by lightning during a fast-moving, pop-up thunderstorm that rolled over Orchard Beach late Thursday afternoon.

Police say a family dining outside narrowly missed being hit. The force of the impact shattered restaurant windows and sent glass into the building.

Despite being crowded with customers and staff, no one inside the Wendy's were injured.

The Monmouth Junction Fire Department helped remove the driver of the Toyota. She was taken to Robert Wood Johnson University Hospital in stable condition.
A child who was a passenger in the Audi complained of pain and was taken by family members to a nearby hospital.

"This is nothing short of a miracle that no one was seriously injured or killed in this crash," South Brunswick Police Chief Raymond Hayducka said. "To think it was the middle of the day, people were eating both inside and outside and none of them were injured. The building was damaged to the point it can't be used but everyone eating was able to walk away."

The South Brunswick Building Department ruled the building needed to be closed for examination.

An investigation into the cause of the crash underway.

Officials say preliminary indications are that the driver suffered a medical episode before the crash.