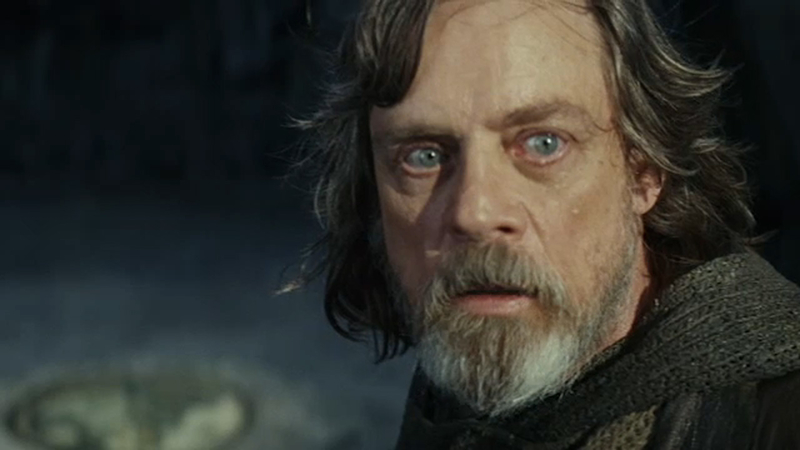 NEW YORK (WABC) -- "The Last Jedi" is what Hollywood calls "critic proof," which is just another way of saying it's going to be a big blockbuster no matter what I say about it.

The sentiment is especially true when you consider its predecessor, "The Force Awakens," grossed $2 BILLION around the world. Behind all of the hype and hyperbole that accompanies the release of any Star Wars movie lies a film that recalls the best of what's come before and should resonate both with the passionate fans and those who are less enthusiastic.

The new movie begins where "The Force Awakens" left off, with Rey -- played by Daisy Ridley -- seeking help from Luke Skywalker. Mark Hamill reprises his role, and truth be told, he is a better icon than actor. He is a star to be sure, but he's a legend with a limited range. And that makes the first hour drag and seem less meaningful given the stakes involved.

As a Resistance fighter, played by Oscar Issac, puts it, "We are the spark that will light the fire that will bring The First Order down."

The Resistance is given life by Isaac's Poe Dameron, and by John Boyega's Finn and Ridley's Rey. But the latter two don't spend much time together, and I missed their repartee from "The Force Awakens."

Their opponents -- such as Snoke, played by Andy Serkis -- are appropriately evil, and a conflicted Kylo Ren is played brilliantly by Adam Driver.

The Resistance spends most of the movie on the run from The First Order. The fighters are under the command of Laura Dern's Amilyn Holdo, who was put in charge by Princess Leia. The death of Carrie Fisher lends an extra note of poignancy to her scenes, but overall, there's no shortage of action, and that middle hour really moves.

At two hours and 32 minutes, most moviegoers won't feel shortchanged.

Britain's Prince William and Prince Harry have cameos in one scene, though it's virtually impossible to spot them since they appear wearing storm trooper helmets.