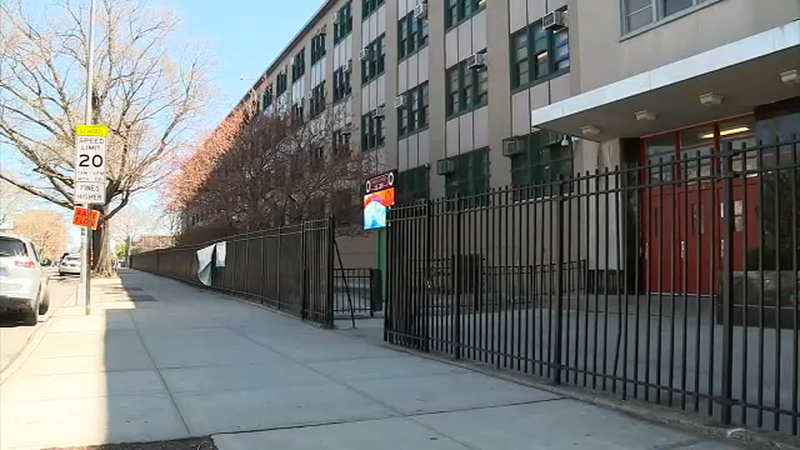 BATH BEACH, Brooklyn (WABC) -- Eyewitness News sat down exclusively Tuesday with the parents of a 5-year-old Brooklyn boy who wandered out of a unsecured door at his charter elementary school in Bath Beach.

The child was found by a woman an hour later two miles from the school.

The incident happened April 3 at Coney Island Prep Elementary School.
"I don't want no one suffer what I suffer that day," said the child's mother, Casilda Mesa.

Eyewitness News obtained the incident report from the school.

On April 3, the school bus, which was supposed to take home kindergarten student Juan Francisco Reynoso Mesa, broke down just outside the school building.

School officials called parents to pick up their children at the school, since another bus wouldn't be available for an hour.

Julio Reynoso, the child's father, arrived at the school about 20 minutes later. The school safety agent radioed up to the music room where the students were being held to inform the teacher that Juan Francisco's father had arrived.

According to the incident report, "The teacher supervising the students copied on the radio and sent Juan Francisco downstairs. Soon after, the principal observed Juan Francisco in the hallway, informed him that his Dad was here, and instructed him to head downstairs to the security desk."

This occurred around 4:10 p.m. Coney Island Prep is located on the fourth floor of I.S. 281 Joseph B. Cavallaro School. The security desk is on the first floor of the building.

At approximately 4:23 p.m., the school safety agent radioed to the staff asking where Juan Francisco was because he hadn't arrived at the security desk.

"I called my wife and I say, I waiting here 15 minutes for Francisco and not coming down," recounted Reynoso.

Staff later learned that the doors to Stairwell B, where Juan Francisco had left through, did not have alarms.

At 4:41 p.m. the school's Director of Operations, Karen Johnson, called 911 to report a missing child.

Eventually school staff was able to review the security camera footage. It showed Juan Francisco exiting the building through an unarmed door at 4:13 p.m. He was viewed on exterior cameras walking northeast on 24th Avenue towards Bath Avenue.

At 5:13 p.m. a woman found Juan Francisco two miles away at 75th Street and 16th Avenue. She called police and about 15 minutes later Juan Francisco was reunited with his parents.

"There were so many mistakes that the school made and so much time that transpired before they found Juan Francisco that, you know, we're very fortunate that the result is what it was," said the family's attorney, William Ferro.

Ferro pointed to the fact that the school safety agent did not know how to review the surveillance camera footage and that intercom announcements in the school building looking for Juan Francisco only went to the I.S. 281 classrooms.

The school's deputy Executive Director, Leslie-Bernard Joseph, said in a statement to Eyewitness News, "Coney Island Prep is committed to putting the safety of our scholars first. This incident is a reminder that even with strong protections in place, challenges may arise, and so we must continue to be vigilant."

Juan Francisco's parents pulled Juan Francisco out of the school the next day after they said they did not receive sufficient answers from school officials about how the incident occurred. They are considering filing a lawsuit against the school for pain and suffering.