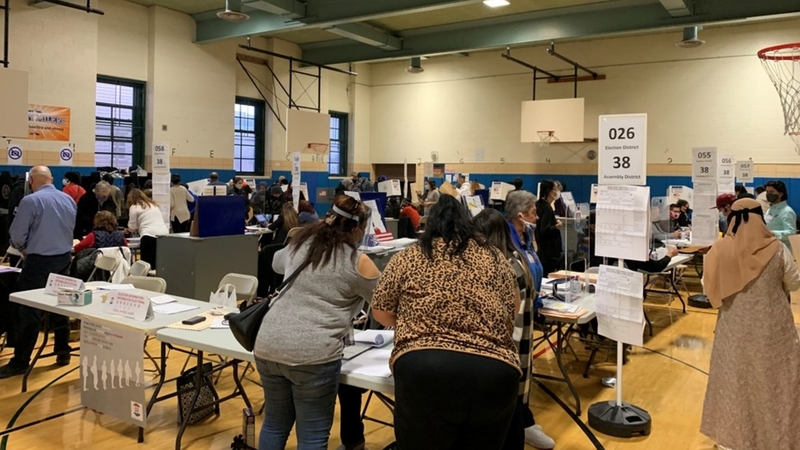 NEW YORK (WABC) -- A record number of people voted in the 2020 election in New York.

Despite the huge turnout, it was a smooth process with few problems reported.

Other than some hour long lines and a few voting sites that opened late, for a city of New York's size, 1.2 million people showed up to cast their ballot in person with few issues.

All across the country, including in New York City, businesses are boarding up amid the potential of protests and unrest based on the results of the presidential election.

The mayor attributes a lot of that to the amount of people who showed up last week to vote early, the first time New Yorkers had the option.

The city is still waiting to see how many of the 1 million absentee ballots that were requested are returned.

"Yesterday could equal or surpass the highest turnout we've ever had in a presidential election in New York City, and this is during the pandemic," Deputy Mayor Phil Thompson said.

Seven On Your Side Investigates analyzed ABC News exit polling data for the state of New York.

Sixty-one percent of those polled rated the economy as "not so good or poor" and most of those voters chose Joe Biden.

When asked "who would better handle the coronavirus pandemic," 71% voted for Biden.

And when asked about racism, 82% of polled voters in New York said it's an important problem, and a majority of those voters also chose Biden.

When asked "which best describes your feelings about the way the federal government is working?" 68% said "dissatisfied or angry," of those, 85% voted for Biden.

Exiting polling shows 14% of voters in New York State voted for the first time in the election.

Moving forward, Mayor de Blasio has said he wants changes made to the New York City Board of Elections so long, early voting lines don't happen again to the magnitude they did this year.

Sunday is the final day to vote early in New York and nearly one million people have already cast ballots in NYC.

But with record turnout, during the middle of a pandemic, the voting process appears to be a winner.

"Whether it was interference from foreign nations and hacking or a voter suppression efforts violence, we didn't see any of those things, thank God," de Blasio said. "We saw a fair, clean election with a huge amount of participation, that's a good thing."