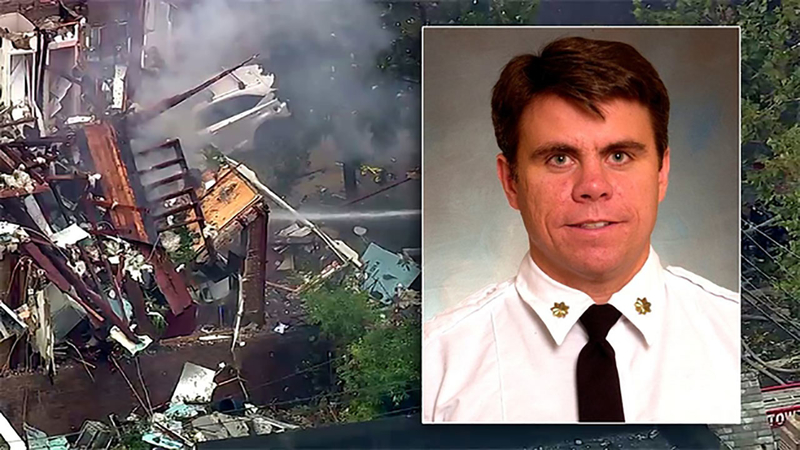 MELROSE, The Bronx (WABC) -- Two years after an explosion in the Bronx killed an FDNY chief, the two men charged in the case learned their fate -- and a survivor of the incident had a chance to share his pain and anger.
Minutes before the sentencing, FDNY Lt. Richard Ruebenacker, who survived the deadly 2016 blast at an illegal grow house, read a victim impact statement on behalf of the department and the family of Battalion Chief Michael Fahy, who lost his life in the blast. His words were both mournful and angry.

"The city lost a hero on September 27, and in exchange, we saved you. New York City was certainly on the losing end of that deal," he read. You also helped rip from this department one of the most admired, most intelligent, most respected brothers that we were ever blessed enough to call one of our own."

The lieutenant's remarks were so powerful that the attorney for one defendant, 36-year-old Julio Salcedo, said her client was too overcome with emotion to speak.

A courageous leader killed in the line of duty, hundreds are gathering to honor FDNY Deputy Chief #MichaelFahy. pic.twitter.com/Rrd7byCTLg

Minutes later, the judge sentenced Salcedo to up to four years for second-degree manslaughter and first-degree criminal possession of marijuana.

The other defendant Garivaldi Castillo, 33, will serve up to six years for the same charges.

Both men pleaded guilty last month, and the sentences were in line with that plea deal.

Fahy was the incident commander in September 2016 when the FDNY responded to call about leaking gas at a house along 234th Street in the Kingsbridge section of the Bronx.
That home was being used as a marijuana grow house, and the way the defendants covered the second-floor windows with foil panels that didn't allow that leaking gas to ventilate.

This led to a dramatic explosion that blew off a slate roof, which struck and killed the 44-year-old Fahy, a nearly 20-year veteran of the job and father of three.

Moments earlier, he had instructed Salcedo to leave the building, saving his life.

Through a letter read by his attorney, Salcedo expressed remorse while Castillo spoke for himself through an interpreter.

"From the bottom of my heart, I didn't want this to happen," Castillo said.

The judge in the case also expressed his condolences to the FDNY and Fahy's family members at the sentencing. He said the case is a tragic reminder of the sacrifices the department makes.