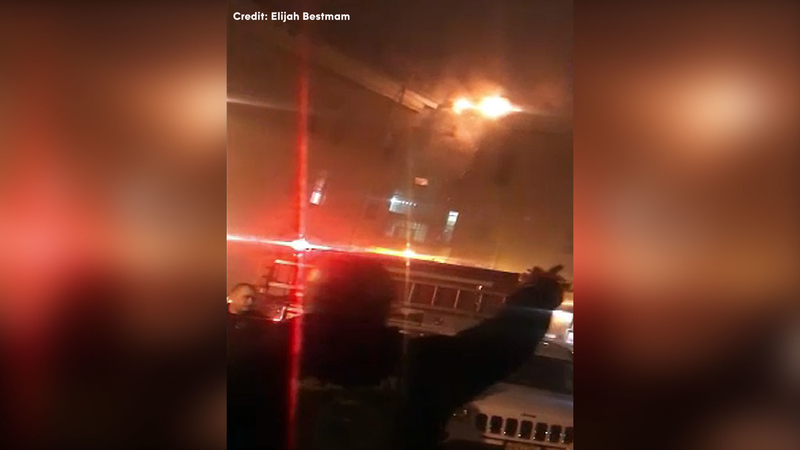 The blaze was reported just after 2 a.m. at 3 Islandview Court in Bayonne.

Firefighters encountered heavy fire on the third floor when they arrived at the three-story building.

The fire quickly went to a second alarm.

"They evacuated," resident James Amadeo said. "The cops were coming and banging on the doors to get out, and then the left side of the building, the whole side of that building, was up in flames."

After knocking down the initial fire, crews spent several hours battling hot spots that continued to flare throughout the third floor.

"The fire entered the cockloft," Bayonne Fire Chief Keith Weaver said." It was difficult for us to access due to it being a rain roof, or a second roof placed over the building."

Firefighters pulled the man from the fire and found a woman in the bedroom of the apartment where the fire broke out.

Both victims were rushed to Bayonne Medical Center but did not survive.

The victims were identified as 75-year-old Balbina Macchio and 65-year-old John Macchio.

A third person refused medical attention at the scene.

"It took a while for them to start putting water on the fire," resident Michelle Johnson said. "Very, very frustrated, and we're standing out here watching the fire, and where's the water?"

All 12 units in the building were affected by the fire and a total of 32 occupants have been displaced, including 28 adults and four children.

"Any displaced occupants are under the care of Bayonne OEM and the Red Cross, and we will be setting up shelters in conjunction with the Bayonne Board of Education," Chief Weaver said.
.
The Red Cross was providing emergency assistance.

"Our hearts are with those affected by a #fire on Islandview Court in #Bayonne," the agency said on Twitter. "At this time, our Red Cross volunteers have provided comfort, care and emergency assistance for temporary lodging, food and clothing needs to 32 people from 17 families, as needed. #DisasterRelief."