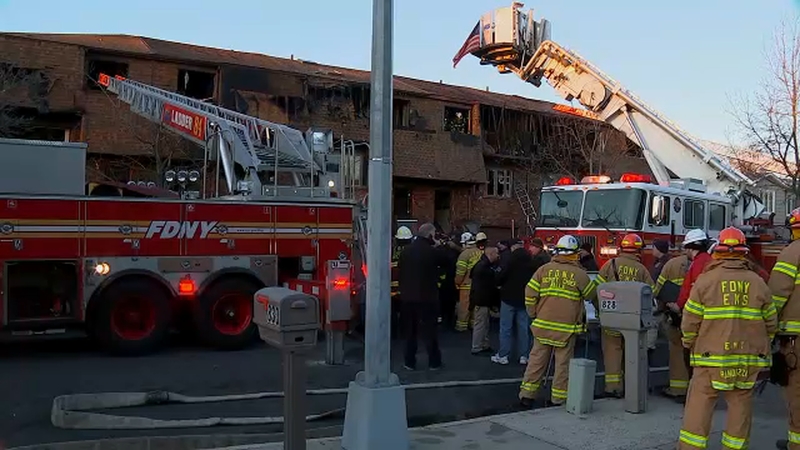 PRINCE'S BAY, Staten Island (WABC) -- Hundreds of firefighters battled a raging and fast-moving fire that spread through a row of town-homes on Staten Island on Monday.

The fire was reported shortly after 3 p.m. on Rensselaer Avenue, and within 30 minutes, a fifth alarm had been sounded as the flames quickly spread.

Officials say 18 firefighters and one civilian suffered injuries in the fire, but all the injuries were believed to be minor.

Heavy smoke could be seen pouring from the row of connected homes with firefighters trying to contain the fire from the ground and the roof.

The FDNY said wood construction in the attics allowed the fire to spread quickly through the roof.

Reise Carjullo was in the shower when he first noticed the smoke. But then he remembered his brother was still upstairs and sound asleep.

"I ran back in the house as the fire was going, I ran up to his room, I ripped him out of the bed and said, 'C'mon, we gotta go, our house is on fire,'" Carjullo said.

His brother, Richie Carjullo, said he owes his brother his life.

Officials say one person suffered minor injuries and was being treated at the scene, due in large part to the work of a retired NYPD sergeant who ran into one of the buildings and carried out a woman in a wheelchair.

The fire was brought under control after about two hours.

There was significant damage to all of the homes affected by the fire. The Red Cross was assisting the nearly 30 people displaced by the blaze.