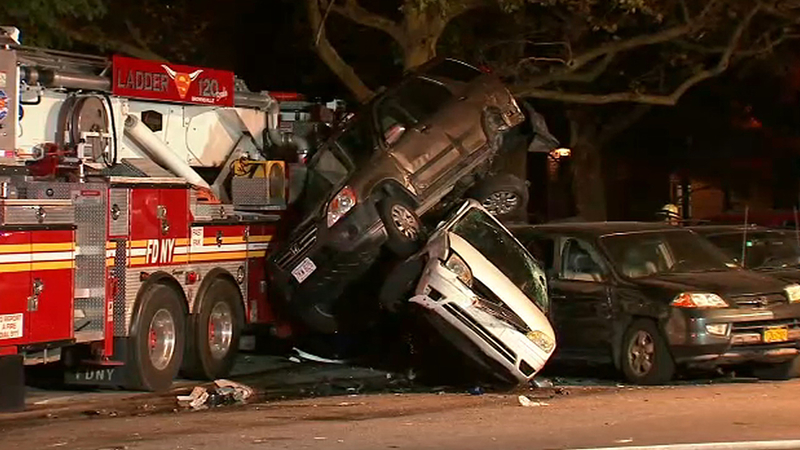 BROWNSVILLE, Brooklyn (WABC) -- A firefighter is expected to survive after an FDNY fire truck jumped a curb and slammed into parked vehicles in Brooklyn.

Sources say the truck had been stopped at a traffic light on East New York Avenue when the driver suffered some sort of seizure.

The FDNY chauffeur's foot hit the accelerator and the truck veered left, slamming into a row of parked cars by a NYCHA project with such force, one of them went airborne.

FDNY Ladder 120 was heading back to the firehouse on Watkins Street and did not have lights or sirens on at the time.

Police say at least a dozen cars were damaged.

"I got a lot of damage, the whole back end is totaled, everything," Patrick Gil said.

Gil says he was working at the auto body shop across the street when he saw his own car get smashed into pieces.

Six firefighters were in the truck at the time. One was taken to Brookdale University Hospital in serious but stable condition with non-life-threatening injuries

#BREAKING: @FDNY ladder truck loses control, slams into parked cars in #Brownsville #Brooklyn. Sources say fire fighter at the wheel had a medical episode, has been hospitalized in serious but stable condition. No other injuries. #abc7ny (photos: Peter Gerber) pic.twitter.com/BhnBa6QkF3

The other firefighters were evaluated at the scene but not injured. No pedestrians were hurt.

For hours, investigators took measurements at the scene and worked to figure out the best way to pick the wreckage apart.

"Hopefully that fireman is all right man, lucky nobody was in those cars, could have been a tragedy," said Raymond, an eyewitness.

"I can't be angry," Gil said. "It's an accident, anything can happen."

The cleanup at the scene continued Thursday.