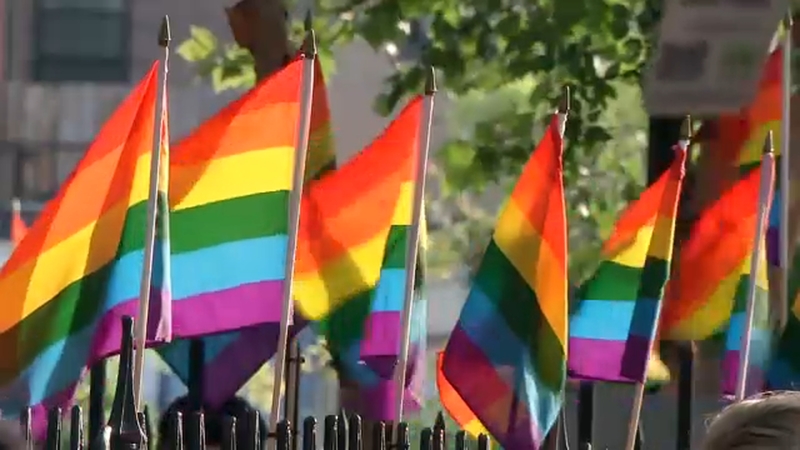 NYC will advertise acceptance of LGBTQ community on Florida billboards

NEW YORK CITY (WABC) -- Mayor Eric Adams will attempt to lure Floridians to New York City in a twist on the age-old migration of New Yorkers flocking to the sunshine state.

"This is the city of stonewall," Adams said. "This is a city where we are proud to talk about how you can live in a comfortable setting and not be harassed, not be abused."

Florida's new legislation prevents any instruction on sexual orientation and gender identity until after third grade, a tactic that could isolate children struggling with their identity.

Kalima McKenzie Simms runs the LGBTQ programs for the New York City Department of Education and says she knows firsthand that support for LGBTQ students in schools is vital.

"Every student needs to be heard, seen, affirmed," Simms said. "A staggering 50% of transgender youth who are not supported are more likely to attempt suicide."

The city will put up several billboards across the sunshine state for eight weeks to celebrate New York's "diversity and acceptance" of the LGBTQ+ community.

And while Adams did face criticism from leaders of the LGBTQ+ community in the city for some of his appointments, they all appear to be united against a greater enemy, DeSantis.

"We're very disappointed and outraged" he admitted, but they have decided to "move onward. There's a lot we can do together."

Councilmember Chi Ossé, who is queer, had some choice words for the governor of Florida at a press conference today announcing the billboards.

"I also want to give a big FU to Governor Desantis for his lack of leadership and standing with the LGBTQ in solidarity," Ossé said.

The ads like "loud, proud and still allowed" are pithy, provocative, and pointed and they're free.

Mayor Adams said that all the billboard space in Florida is being donated by people from outside of the city who are "standing up."

"This is costing NYC taxpayers nothing," Adams said.