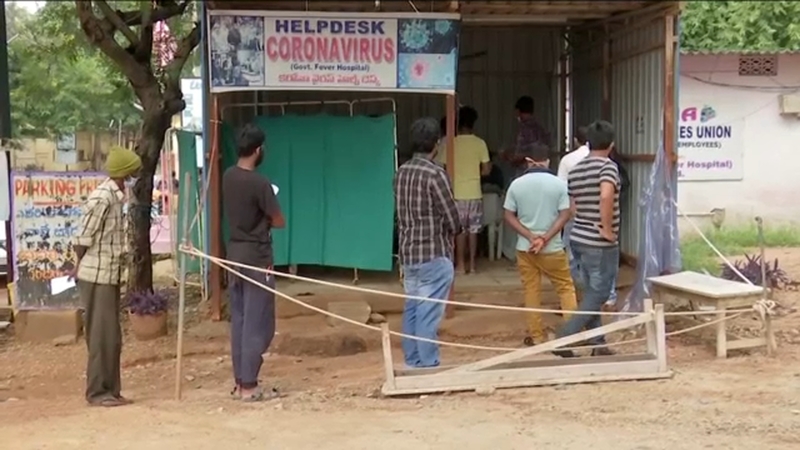 Despite the alarming rise in cases, the government in India has pushed for a reopening of public transportation, markets and other public spaces to bring the economy back.

NJ MVC announces a regional center will close due to positive COVID test
The New Jersey Motor Vehicle Commission has announced that, effective immediately, the Eatontown Licensing/Regional Center will be closed until Saturday, October 24, due to an employee testing positive for COVID-19. Eatontown Road Test Operations are in a separate facility and will remain open for appointments. Eatontown Inspection Station will be closed on Tuesday, October 13, but will reopen for normal operations on Wednesday, October 14.

Trump's latest health update
President Donald Trump's physician Dr. Sean Conley says the president tested negative for COVID-19 "on consecutive days." "In response to your inquiry regarding the President's most recent COVID-19 tests, I can share with you that he has tested negative, on consecutive days, using the Abbot BinaxNOW antigen card," the White House release said.

NFL makes more schedule changes
Meanwhile, the NFL announced the Denver Broncos at New England Patriots game scheduled for Monday has been postponed. Both teams will now have a Week 5 bye. The game will now be played in Week 6 on Sunday, October 18.

"The decision was made to ensure the health and safety of players, coaches and game day personnel and in consultation with medical experts," the NFL said in a statement. Several other NFL games have also been affected, including two Jets games. The Jets will now play the Dolphins in Miami next week, rather than in Week 10. They were scheduled to play the Chargers in Los Angeles, that game was moved to Week 11, Sunday, November 22.

Also, the Tennessee Titans said on Sunday they learned that a staff member tested positive. "We have temporarily closed our facility and are in communication with the league on the next steps," the Titans said.

Pres. Trump insists he's 'immune' from coronavirus, a claim that's impossible to prove
President Donald Trump on Sunday declared he was healthy enough to return to the campaign trail, a day after the White House doctor said he was no longer at risk of transmitting the coronavirus but did not say explicitly whether Trump had tested negative for it.

Trump, who was poised Monday to host his first rally after his COVID-19 diagnosis, declared he was now "immune" from the virus, a claim that was impossible to prove and comes amid a series of outstanding questions about the president's health.

Florida has highest daily caseload since August
Florida officials have reported the state's biggest one-day total of confirmed coronavirus cases since late August, a day after not releasing any pandemic data because of a problem with a private testing laboratory.

The Florida Department of Health said Sunday there were 3,700 new cases in the previous 24 hours and 1,790 for the day before that. It said there were 180 COVID-19 over both days.

They say there were more than 110 people at the rave along with a DJ, tables, chairs, food service, a bar, hookah, lighting, torches, and security personnel. Four organizers were charged with multiple criminal, park, and health offenses.

First classical music festival in China
China held its first classical music festival since the start of the pandemic, featuring musicians from the outbreak's initial epicenter - Wuhan. Musicians from the Wuhan Philharmonic presented a choral symphony dedicated to the victims of COVID-19. It's part of an effort to help with the country's emotional healing process with music written to express frustration, helplessness, and hope.

'Day of the Dead' adjustments
Mexico's annual and flamboyant "Day of the Dead" activities will be scaled down due to the pandemic. Several days ago, two other traditional Mexican plays took to the stage after months of socially distanced rehearsals. "The Day of the Dead" is a Mexican national holiday that involves family and friends gathering to pray and remember friends and family members who have died. In Mexican culture, death is viewed not as a day of sadness but as a day in which loved ones awaken and celebrate with them.