Diver attacked by shark off California coast thought he was 'finished' 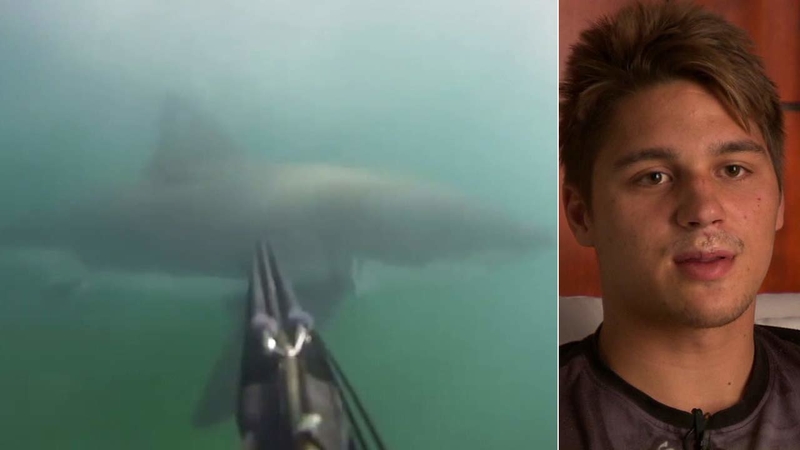 SANTA BARBARA, California -- The college student who came within inches of a great white shark off the coast of Santa Barbara, California, said he definitely thought his life was "finished."

It was like a scene from a terrifying movie. Tyler McQuillen was spearfishing when he was attacked by a great white shark. A GoPro camera captured the frightening encounter.

"I thought it was my friend Brent playing a joke on me, just tugging on my fin. So I thought nothing of it and I didn't turn around," he said.

But that quickly changed once McQuillen felt one of his flippers being ripped right off.

"And I turned around and he was thrashing my fin, and I realized it was a great white," he said. That's when he knew - it was on.

The 22-year-old quickly retrieved the spear gun he had dropped- just in time.

"The second time when he came around when he was coming at me, I definitely thought I was finished right there," he said.

The GoPro video shows McQuillen pushing the shark away as it comes within inches from him. Seconds later, the great white is back for round three, but this time, McQuillen jabs it with his spear gun and scares it away. He then swam back to shore and got help.

McQuillen is being treated at a hospital for a minor foot injury. He says researchers have told him the great white was not looking for food. Instead, it was being territorial and confused him with another shark.

"That's why he came up from behind me and bit my fin, because they normally come behind sharks and bite their tails to let them know to get out of the area. So he was trying to defend his territory," he explained.

McQuillen said this wasn't the adrenaline rush he was looking for while spearfishing that day, but he can't wait to jump back in the water once he is medically cleared.