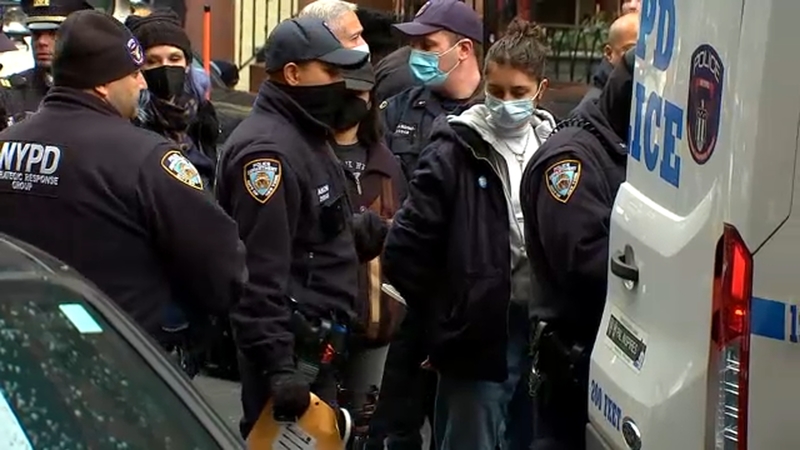 Arrests made after attempts to halt dismantling of homeless encampment

EAST VILLAGE, Manhattan (WABC) -- Several arrests were made after a team of city workers and police arrived to dismantle a homeless encampment in the East Village of Manhattan.

City workers and police were met by advocates supporting the homeless from being removed, which led to at least seven arrests.

It's not yet clear if all the arrested were advocates and activists.

By Wednesday evening, the encampment was vacated and being swept up by sanitation, but not before some push back.

"We're committed to staying together until this is resolved, until we have permanent housing," said Sinthia Vee who's currently homeless and living in the encampment.

The area in question is a section of East 9th Street between Avenue B and Avenue C in the East Village, on the sidewalk covered by scaffolding.

"This camp means a lot to me because it's not just a homeless camp," Vee said. "It's also a political statement that the solution to homelessness is housing. Not shelters or safe-havens, but housing."

Safe Havens are the second half of mayor Adams' plan to combat homelessness. And while some organizations like the Coalition for the Homeless say more beds and better access to city resources is a good thing, they've condemned the upheaval of encampments.

This is not the first time city sanitation crews have cleared out a homelessness encampment here, which some people refer to as anarchy row.

Residents were moved last Thursday, but many returned, prompting the city's efforts to move them again.

"They started coming by around 8:30 this morning," Vee said. "They warned us two days ago, they left us notices. Came back yesterday left us more notices."

The initiative to dismantle 180 homeless encampments across the city started last month.

Despite strong opposition, mayor Adams says, doing so is the best way to connect them with social services and housing.

"Let me tell you what is cruel," Adams said. "Cruel is having people live in cardboard boxes and tents. Human waste."

The NYPD posted flyers near the encampment Tuesday, giving homeless individuals 24 hours to collect their belongings and dismantle the shelter themselves.

However, some individuals didn't leave when the cleaning crew arrive Wednesday. And activists showed up to push back on the city's plan.

About two dozen homeless rights advocates showed up around 11:00 a.m. blocking access to the encampment for sanitation crews.

"I think they should be important to everyone, personally," homeless advocate Nico Equis said. "Because this just shows that state is completely violent and reckless with how they treat people."

A local blog profiled the residents of this encampment, which has now been dubbed "anarchy row."