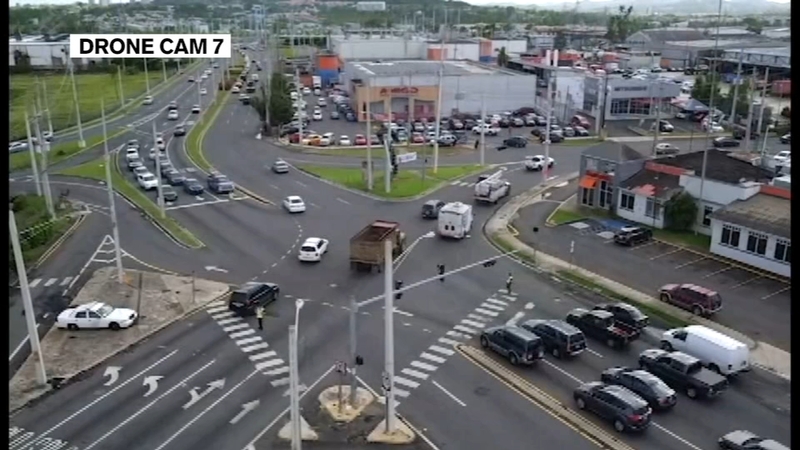 Two months after the hurricane hit, it is still a struggle to leave Puerto Rico, let alone live there. Half of the island still does not have power.

And the storm continues to take a human toll on its residents.

A young girl named Sofia said goodbye to her dad for who knows how long as she headed to New York with her mom. Life in Puerto Rico is just too hard.

"It's really difficult - I feel like my heart is being ripped out of my body," says Exael Gonzalez.

JetBlue Duty Manager Maria Natal may share the name of the storm that caused such despair, but she is a lifeline.

"When I walk through these doors, I see lots of families saying goodbye - hugging, crying. It is the new norm every single day," she says.

Bronx-raised Natal has been working around the clock in San Juan with her JetBlue team to serve as many people as possible.

Tens of thousands have fled the island, and as US citizens, they do not need passports, so flights are booked through the end of the year. Flights in to the island are loaded with relief supplies.

On Sunday, the airline received pallets of water on a flight from JFK Airport, destined for a special storeroom for the families of the 300 JetBlue employees, many of whom share the same dire straits as the passengers they are serving.

"It's tough to see so many people day in and day out not being able to continue any longer without any power, any water, any utilities," added Natal.

Back at the security checkpoint Sunday night, there were more tears, more hugs and more waves.

"It's gonna be really hard when I leave today," said Migdalia Figueroa.

Figueroa, who is from Manhattan's Upper West Side, flew down to Puerto Rico to convince her brother and ailing father to come back with her, but they refused. For some, the prospect of leaving is even scarier than the storm itself.

"What I did for both was just buy them generators, give them extra food, extra cash, but they just won't leave. I plan to come back again and see if I can convince them one more time," she added.

Seven weeks after the storm, more than half of Puerto Rico is still in the dark.

The Army Corps of Engineers continues working to assess and repair the damage.

Thousands of power poles and wires need to be replaced, one at a time.

"At the end of the day we all know when we go to bed at night, there are still people in the dark so we have a real high-five moment, grateful we can be a part of helping to provide that service," said Lt. Col. Andrew Olson of the Army Corps of Engineers. "But there's a real sense of urgency to get more and more turned on."

"The team out here they go out in the field, they watch the work being done and they see lights turn on," said Lt. Col. Andy Olson, Army Corps of Engineers. "They see the hope and joy and gratitude that comes from that very, very rewarding and very, very real. All of a sudden their world lit up."

Progress is fleeing. Monday night came word of one of the contractors hired by Whitefish Energy, the now fired company from Montana, is pulling its workers out.

As the Army Corps trumpets its 10,000th blue tarp installation, there are still at least 50,000 damaged roofs to go.

But for all the misery, for all the time that it has taken, there weren't many complaints. Not from Joselito Delgado from Perth Amboy. He was selling fruits and vegetables on the side of the road.

His family is begging him to return to New Jersey, but he chooses to stay.

"You just got to keep going," Delgado said. "Don't give up. That's how life is."

Another struggling industry is the once bustling tourism industry.

"We need your visits, we need people to see Puerto Rico, and I think they're going to get a really pleasant surprise," Jose Izquierdo said.

In face, 82,000 jobs are on the line. There is some encouraging news. 89 percent of supermarkets are open and gas stations are back in business.

It's mostly in the mountains where people are suffering the most.