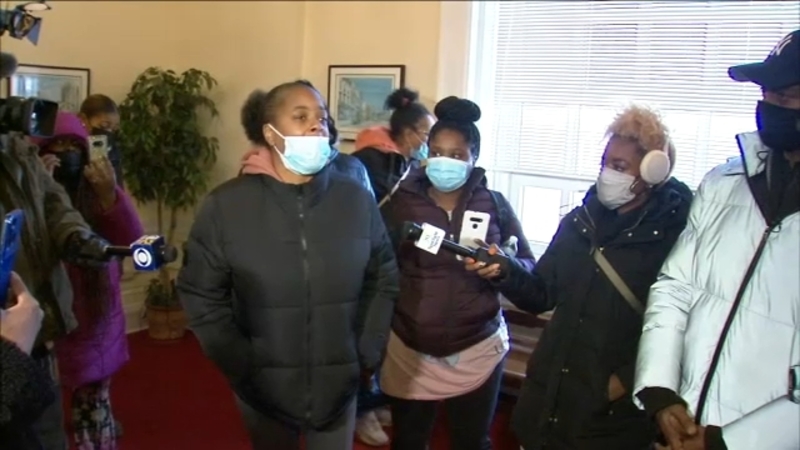 Frustrations grow for NJ families displaced by flooding from Ida

ELIZABETH, New Jersey -- In Elizabeth, New Jersey, residents of a housing complex flooded by the remnants of Ida back in September are still without real homes.

And now, they're being forced to leave the local hotels that have served as temporary shelter if they turn down apartments that are too small for their families or are too far away.

The nightmare continues months after the deadly flooding that killed four of their neighbors and forced them to leave their belongings behind.

On Monday, they took their frustrations to Elizabeth City Hall.

"Tell the mayor, this is a sampling of the tenants that are still displaced. Hundreds more are displaced," said Salaam Ismial, an advocate for flood victims.

They were displaced nearly five months ago, when flooding from Ida destroyed the apartments at Oakwood Plaza. And they're still in hotels. Pearl McDougald just moved to her fifth one.

"The last hotel before the embassy suites we were at, it was mice infested, roaches, it was just horrible. All I want to do is just get a stable place for me and my 6-year-old," McDougald said.

Frustrated and fed up with the lack of action, families marched straight to the office of Elizabeth Mayor Chris Bollwage, only to be told he wasn't there and would get back to them.

"We need somewhere to live. Or we need these hotel stays extended until we can find somewhere safe, somewhere near and somewhere comfortable to live. Nobody should just have to uproot their lives," Amatullah White said.

Latiayyah Washington was told by the city health department she'd have to be out today.

"Me and my kids don't have nowhere to go. I need somewhere to go," Washington said.

A statement from Union County says multiple agencies are making sure families are not being left without a roof over their head, and that they are each being transitioned into more permanent housing.

But that housing they're being offered is in Atlantic City, where the owner of their flooded building has another property.

Many of these women are working moms with local jobs and kids in school here.

"I don't want to go nowhere far away. Just pick me and my kids up and just leave. I don't have no support system down where they was trying to send me," Washington said.

CLICK HERE for the latest on mass transit impacts in the Tri-State area.

Advocate Salaam Ismial says he doesn't understand why this city didn't do for victims of this disaster what New York did for victims of the deadly Tremont fire, and secure permanent housing right away.

He says the mayor has failed to do his part and coordinate to make sure they get the type of housing they need.

"These are his citizens. And there's no way these should continue to be in this kind of destitute situation four months later," Ismial said.

FEMA has been covering their hotel stays and has told the residents they're covered through March despite what the city says.

And the Department of Housing and Urban Development has been securing housing vouchers for them, but they need time and help to find housing here in Elizabeth where their lives and kids schools are.

That's where they say the city can help but has instead has told them to leave the hotels.

So far, no response from the mayor.