Thousands of JetBlue passengers stranded at JFK due to canceled flights 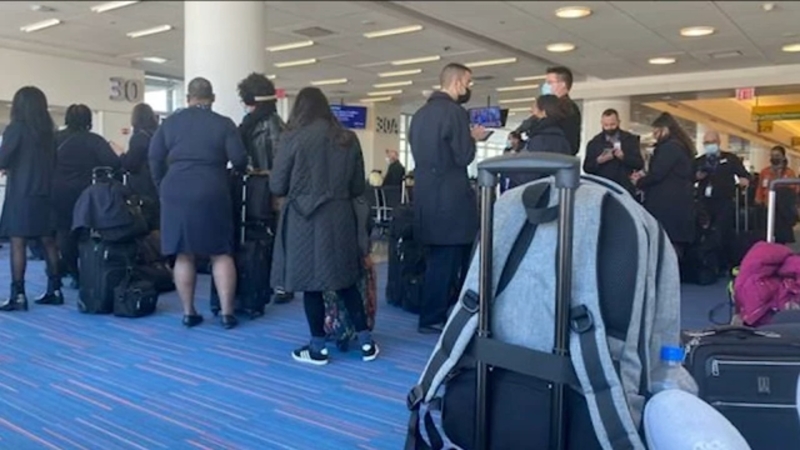 JetBlue passengers stranded at JFK due to canceled flights

NEW YORK CITY (WABC) -- Thousands of passengers are suffering from the fallout from the weekend nor'easter which has stranded many of them at JFK Airport.

After preemptively canceling most flights on Saturday because of snow, JetBlue has struggled to get JFK passengers where they need to go.

"There was a delay every hour on the hour. What was going on," JetBlue passenger Amanda Dunigan said.

Dunigan connected through JFK Sunday morning, where she sat on the tarmac for an hour before deplaning. And then her flight to Boston was repeatedly delayed. She finally rented a car.

"I definitely think it was mismanaged. I think the lack of communication was horrible," she said.

Steven Obadiah is still trying to get back to Florida.

"The flight was supposed to be at noon and they delayed it at 11:55 and then every hour they kept delaying it. I can count the emails I think tt was six or seven delays," Obadiah said.

He is now camping out with his grandfather, but he never got his bag back. He says that was chaos and he posted about pet excrement that was never cleaned up.

"Flights would land, they would go to a remote taxi way and they would sit there for one, two ... over three years," Rabinowitz said.

And it wasn't snow that caused these issues.

"It was really a staffing issue, JetBlue wasn't prepared for the amount of flights coming in and they didn't have the ground crew to move the jet bridges, unload the bags, melt the snow, clear the gates ... everything really critical to getting flights in and out," Rabinowitz said.

For its part, JetBlue is apologizing, saying they "faced a number of conditions that have slowed the operation down."

But at least one customer is done with the excuses.

"The way they handled that, I would never fly them again ... no," Dunigan said.