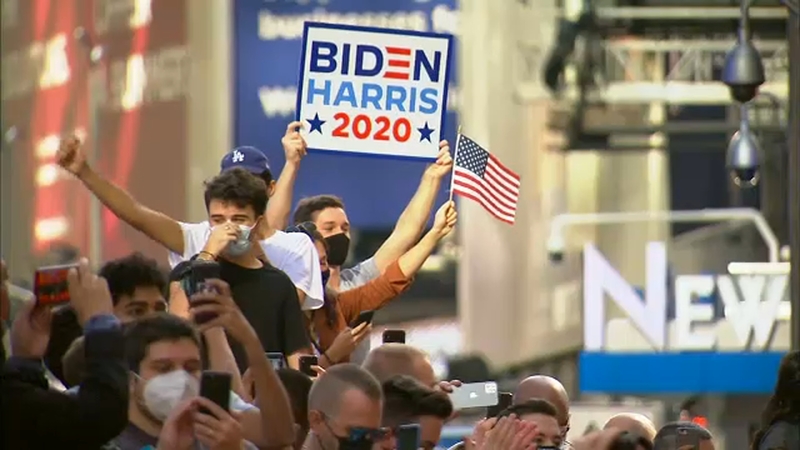 NEW YORK (WABC) -- A historic election for many reasons as Joe Biden becomes the oldest president to ever take office and Sen. Kamala Harris as the first Black woman and first person of South Asian descent to become vice president.

People all over New York City erupted in cheers and screams after news that Joe Biden is set to become the 46th President of the United States.

RELATED: Joe Biden is set to become the next president of the US

Celebration in the streets began during the day and into the night from neighborhoods across the city -- perhaps one of the biggest was in Times Square.

Horns were honking and applause could be heard in the streets. There was a big party in Times Square where thousands took to the streets some coming from out-of-state.
EMBED More News Videos

Even with news of new leadership, the protests haven't stopped as a BLM March was planned in Highland Park, Brooklyn Sunday morning along with other rallies throughout the city.

Supporters of President Trump held demonstrations on Long Island Sunday and called on the President to contest the results of the election.

A caravan of cars with flags, honked their horns in support of the president and echoed his claims of voter fraud during the election.

A similar rally was held in Huntington Station, where more people gathered in support of the president.

RELATED: What's next for President Trump?

What's next for President Trump?