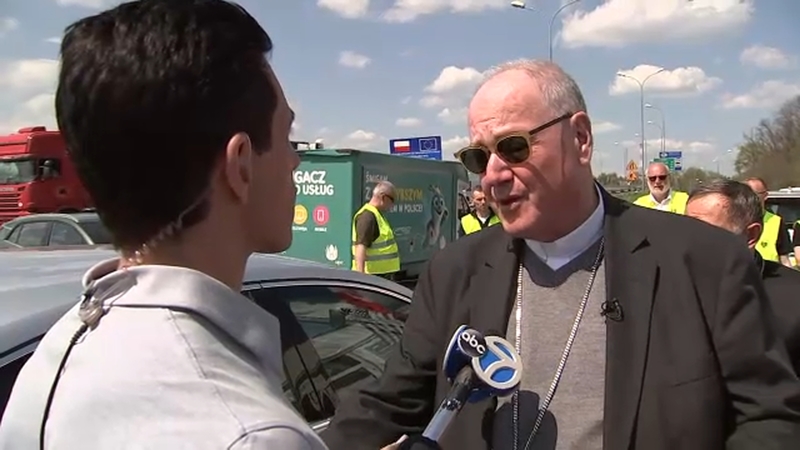 HREBENNE, Poland (WABC) -- Cardinal Timothy Dolan has visited Ukraine, meeting with the victims of war and Catholic relief agencies helping them, in the city of Lviv.

Dolan entered the country in secrecy Sunday night, with a delegation that has traveled with him across Poland and Slovakia over the past four days.

The cardinal stopped at at least six places, meeting with Catholic relief workers and displaced Ukrainians who have taken up residence, at least temporarily, in the Lviv area after fleeing their homes in the eastern part of the country.

HOW TO HELP | Here's how to donate, help Ukraine amid Russian attacks
EMBED More News Videos

Dolan returned from the unannounced whirlwind tour early Monday morning, and Eyewitness News was there, capturing his arrival back in Poland live on Eyewitness News This Morning.

Josh Einiger spoke exclusively with the cardinal as he emerged from his vehicle.
EMBED More News Videos

"We saw one young man who I'll never forget who was in a bombing, a raid, and hasn't spoken since then," Cardinal Dolan told Einiger. "So the trauma there, one cannot minimize. But in general the people were confident. They were hopeful. They were grateful for the help they got. And so that was uplifting for me."

Raw video: Timothy Cardinal Dolan meets with the victims of war and Catholic relief agencies helping them, in the city of Lviv.

Dolan arrived in Poland Friday to meet with Ukrainians escaping the military invasion of their homeland.

"There's also a serene climate," he said. "We don't know what's coming, and we're realistic about it. But right now, we just need to trust and get on with life. That said a lot to me."

Dolan has traveled throughout Poland and Slovakia highlighting the work of Catholic relief agencies, but he's met plenty of others.

At the Krakow train station, site of a huge operation for refugees, Dolan met Adam Keehn, who's leading a massive operation there for AmeriCares.

"There's no doubt that this is on a scale, in terms of the numbers of refugees and people displaced, with some of the major disasters in recent history," Keehn said.

The Connecticut-based non profit ships medical supplies to disaster zones around the world. For this operation, workers are shipping 100 tons of medical supplies, packing them up at their warehouse in Stamford before they are trucked to the border and transferred to Ukrainian truckers, who drive them to medical facilities across the country.

"You know, this is a world historical event, this war in Ukraine, and to be a part of helping to alleviate some of the suffering is rewarding," Keehn said. "We're just a couple months out from the start of the war. There are going to be many, many months of recovery and probably years beyond that."

This is a very religious part of the world, and from watching Dolan interact with people from both Poland and Ukraine over the last few days, it is clear his visit has meant quite a lot to residents who are dealing with a crisis few could envision happening just a few decades after the Holocaust.

Eyewitness News reporter Josh Einiger is in Poland, reporting on a T-shirt factory that manufactures global brands and is owned by a man originally from New Jersey.