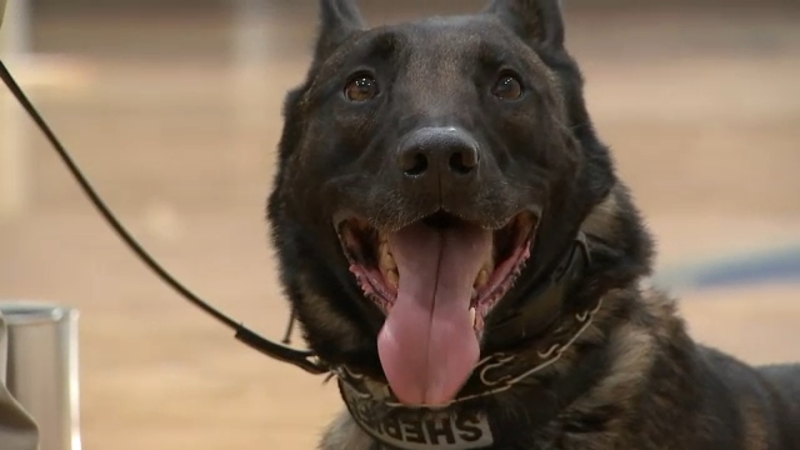 K-9 dogs in training compete in certification trials in NJ

WAYNE, New Jersey (WABC) -- Before you see police K-9 dogs on the street, they get extensive training alongside their handlers -- and even get the chance to compete in some friendly competition.

K-9 trials are underway in New Jersey, dogs putting their skills to the test to find out who's best in show.

And if there was any worry at all, it would be in the handlers -- because these K-9s showed up and showed out top notch skills in detecting explosives in the certification trials.

"So this dog that's working here is an Essex County, one of their newest explosives dogs and recently went to K-9 school in Passaic County," said Lt. Jamie Tangorra, Sheriff Officer K-9 Handler at Passaic County Sheriff's Department. "And when I see them doing their job and finding the explosives and narcotics, it's very gratifying."

The trials are conducted by the Police Canine Association Region 15, and they are tested across the board.

"It's a little bit of a competition," Executive Director Tom Conroy said. "We're looking for the perfect dog, a that moves quickly, a dog that responds quickly. The officer is able to move the dog quickly and read the dog's alert and know that the dog has an odor. The perfect dog shouldn't disturb the package, and it should be a safe dog to work around people."

The partnerships between dog and handler are also judged, and it is a team effort.

"They take their K-9s home," Passaic County Sheriff Richard Berdnik said. "They're part of the family."

Officials also try to throw them off, and some cans may have dog food, coffee grounds, or other scents to see if they distract the K-9s.

Most of these dogs received four months of training under the Passaic County Sheriff's Elite K-9 staff.

"We train probably between 10 to 15 dogs a year sometimes," Tangorra said. "And we help out a lot of the smaller agencies throughout the area that don't have trainers and don't have the facilities."

The top K-9s are chosen to compete in the national trials later this year in Georgia.