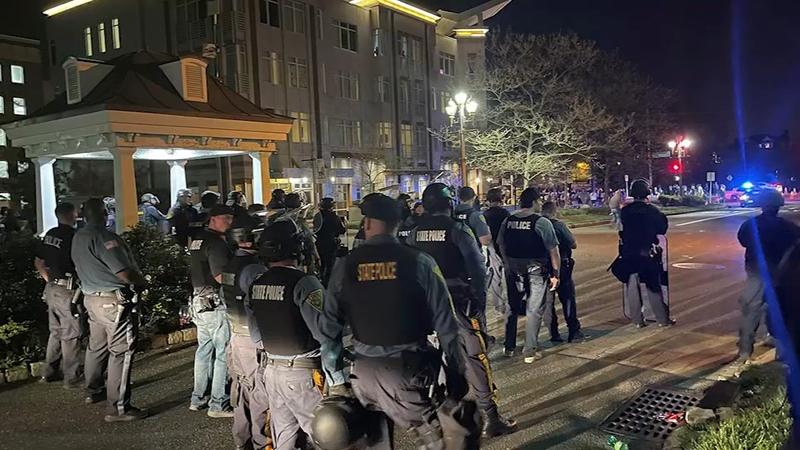 LONG BRANCH, New Jersey (WABC) -- Police in New Jersey say 15 people, including four juveniles, were arrested over the weekend after thousands of people responded to a flyer for a pop-up party.

The incident at Pier Village in Long Branch, which authorities say quickly got out of hand, created a public safety emergency that resulted in a 9 p.m. curfew imposed by the city.

"I don't hear any public comments about what had occurred in Long Branch," Monmouth County Sheriff Shaun Golden said. "And that's unfortunate, because people have to know it's wrong. They know they can come to the Jersey Shore, but if they break the law, and, certainly, test parameters of the law, law enforcement is going to act, and we're going to react."

"These are businesses that are operating that closed at that period of time, shut down because they were scared for their safety," Freeholder Thomas Arnone said.

Except for several minor arrests resulting from the fights that took place among the revelers, the crowd dispersed peacefully after the announcement of the curfew.

"I would like to thank all of our local law enforcement agencies and our state partners for their response to today's incident," Linskey said. "Responding agencies worked in unison to create a swift, professional, and tactical response to what was evolving as a dangerous situation. We appreciate the efforts of Long Branch City Officials issuing tonight's curfew in response to the public safety situation. Their efforts are to be commended." Linskey stated.

One police vehicle was vandalized, but there were no significant injuries or property damage reported at this time.

The person suspected of damaging that car was later arrested, as well, included in the total released by police.

"It's a free country, right?" Golden said. "People want to come to the Jersey shore and have a good time, that's one thing. When it starts becoming illegal and we start having disorderly person offenses and assaults and property damage, that's (another) thing."

Authorities believe the majority attendees arrived by train and were not residents of the area.

Last summer, there were several similar situations of large-scale pop-up parties in the same area.