Protesters gather on Long Island to stand up for women's rights 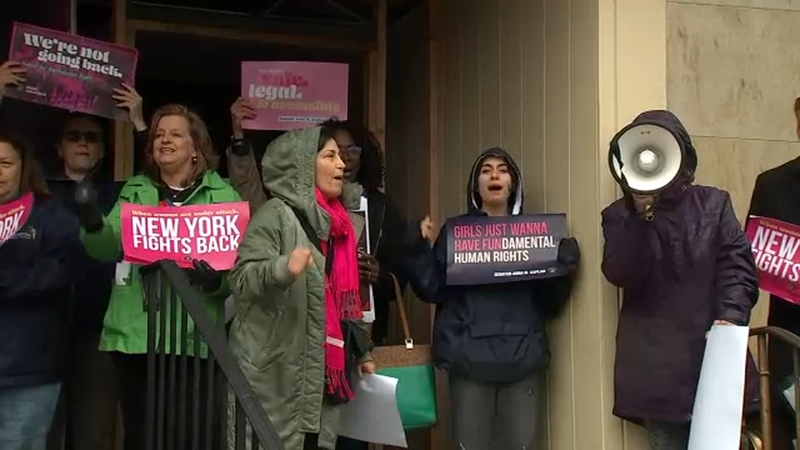 Protesters gather on LI to stand up for women's rights

An Eyewitness News special presentation 'In the Balance,' takes a look at the leaked Supreme Court draft opinion that would overturn Roe v. Wade.

"They want to turn back the clock on not just 50 years, but hundreds of years," said Melissa Cintellus of Planned Parenthood of Greater New York.

Planned Parenthood partnered with State Senator Anna Kaplan to host a rally in protest of the potential overturning of Roe v. Wade.

"We will be heard and the law that has been in existence for 49 years will not be overturned," said Senator Kaplan.

New York Attorney General Letitia James is calling for an amendment to the state constitution to ensure the right to abortion under the law.

"Women are the majority in this country and we got to flex our muscle and that's why I'm here on Long Island - to turn it blue," said James.

This comes as the NYPD directs its officers to give extra patrols across New York City to catholic churches this weekend, because of pro-choice protests.

A protest was held Saturday morning in Lower Manhattan outside the Basilica of Saint Patrick's old cathedral.

The Archdiocese of New York released a statement reading in part,

"We are aware of the call for some kind of protest, and without going into specifics, will work with law enforcement and take appropriate steps as needed."

"We are going to show the country that America is pro-choice, the people are pro-choice and women's rights will not be trampled on by anybody," said Schumer.

Schumer says the Senate will hold a procedural vote next week to start a debate on the Women's Health Protection Act.