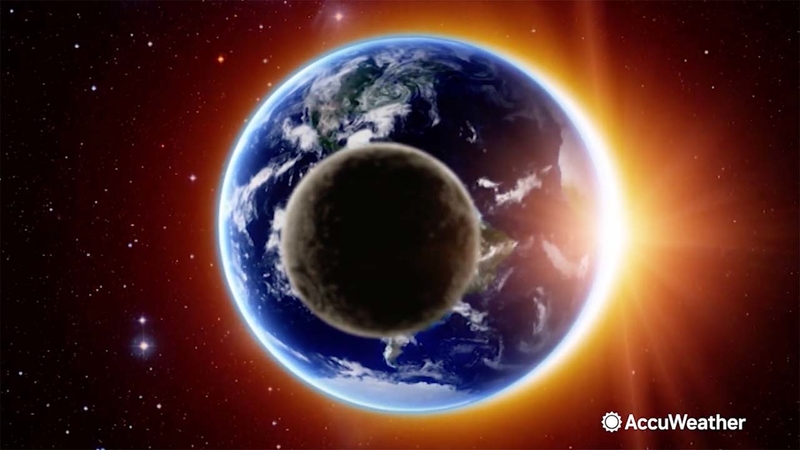 Stargazers all over the world will have an opportunity to see a blood moon over the weekend as a lunar eclipse moves into Earth's orbit.

The partial eclipse, when the moon appears to move into the umbra and part of the moon inside the umbra will appear very dark, will occur just before 10:30 p.m. ET.

Totality will begin just before 11:30 p.m. ET, when the entire moon is inside Earth's umbra and transforms to a coppery-red hue. Totality will end before 1 a.m. Monday, and the penumbral eclipse will end at 2:50 a.m.

Residents in the eastern half of the U.S. and all of South America will be able to observe each stage of the lunar eclipse, and totality will be visible in much of Africa, western Europe, Central and South America and most of North America, according to NASA.

The moon will turn red during an eye-popping spectacle unlike any other in the night sky in 2022 -- as long as it isn't cloudy.

A dark environment away from bright lights will make for the best viewing conditions.

The lunar eclipse occurs when the sun, Earth and moon align, and the moon passes into Earth's shadow, according to NASA. "Blood moon" is the term to describe the part of the total lunar eclipse in which all the Earth's sunrises and sunsets project onto the moon's surface as it passes through Earth's shadow, darkening it and giving it its crimson color.

Rayleigh scattering, the same phenomenon that gives the sky its blue color and makes sunsets red, is what causes the moon to turn red during the eclipse. Red light, which has longer wavelengths than blue light, is seen during a lunar eclipse because the only sunlight reaching the moon passes through Earth's atmosphere, according to NASA.

"It's as if all the world's sunrises and sunsets are projected onto the Moon," according to the administration.

The more dust or clouds in the Earth's atmosphere at the time of the eclipse, the more red the moon will appear.

During the eclipse, cloud cover is expected from Dallas to Chicago, while scattered clouds will range from Atlanta to New York. NASA will broadcast a livestream of the total lunar eclipse.