Ballots sent to wrong voters in Brooklyn; Officials point finger at who is to blame 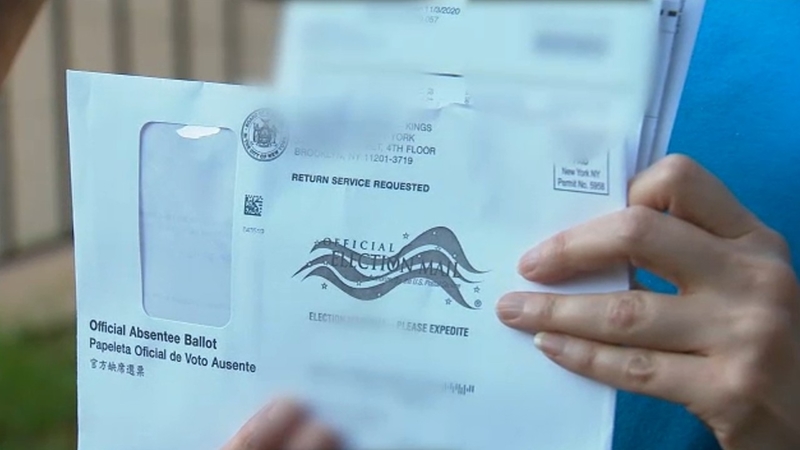 PARK SLOPE, Brooklyn (WABC) -- Major issues found with mail-in ballots sent to some voters in New York City could pose a big problem with Election Day around the corner, and state officials on Tuesday blamed a pair of errors.

After the city Board of Elections mailed out 100,000 absentee ballots to voters in Brooklyn, some recipients reported that the name and address printed on their official ballot envelope was wrong or that they received a ballot that appeared to a "military absentee" when they were not a member of the armed forces.

"Obviously we saw the same news as everyone else last night on social media, and to say we are troubled by this is the understatement of the year," said Melissa DeRosa, secretary to Governor Andrew Cuomo. "It looks like it is confined to 100,000 people in Brooklyn. There could be spillover in other zip codes."

She noted that there were two simultaneous issues causing confusion among voters, saying the first was that some absentee ballots were missing a slash in between "military" and "absentee," leading some voters to think they received a military ballot and not a ballot that can be both military and absentee.

The second, she outlined, was with the vendor mismatching ballots and envelopes.

ABC7 is partnering with vote.org as part of the "I am a voter" campaign.

The New York City Board of Elections said it will be overnighting new ballots, labeled "second ballots," to all voters affected .

"They're in the process right now trying to identify everybody who was impacted so that they can deal with it, but it's unacceptable," DeRosa said.

It’s unacceptable that voters in Brooklyn are receiving absentee ballots with incorrect oath envelopes. The @BOENYC must do better. This is a critically important election, and all absentee voters need to know:

New York State Senator Zellnor Myrie tweeted on Tuesday that he heard reports that Governor Cuomo wants to prevent the BOE from correcting the issue.

We are hearing reports that @NYGovCuomo wants to prevent the @BOENYC from rectifying the issue by stopping them from sending corrected ballots.

This is straight up disenfranchisement and an affront to our democracy. The vendor screwed up and is trying to fix it. Let them!

The governor's office tweeted a statement in response:

The error appears to have bene made by Phoenix Graphics, a commercial printing company based in Rochester, hired to mail out ballots in Brooklyn and Queens.

The company was also hired to print and sent ballots in June's primary and has worked with the city's Board of Elections in the past.

Daniel Taranto and his sister Maryann have been voting by absentee ballot for years, and there's never been a problem.

"I filled it out, I was going to put it into the envelope and I noticed that there was a different name on the ballot," Daniel Taranto said.

A poodle named 'Bear' is fighting for his life after being thrown out of a vehicle in Paterson.

The names and addresses on the outside of the envelopes were correct, but the ballots inside had a different name.

"It's a very big deal," Maryann Taranto said. "If somebody's not paying attention, stuffs it in an envelope and just mails it, they didn't vote. They voted, yeah, but they voted with somebody else's name. That is a big issue."

"There are already far too many malevolent actions that have made it harder for people to vote -- from suppressive laws to a president actively and intentionally undermining confidence in our elections -- to add systemic incompetence to the barriers preventing New Yorkers from casting their ballot. It is imperative that we rapidly re-issue ballots to every affected New Yorker. Beyond that, the vendor responsible must be investigated, and possibly terminated and replaced. This is far from the first time that the Board of Elections has failed to meet its mandate of facilitating a smooth, stable, secure election. As in many areas, this was an issue exacerbated by the pandemic, not created by it - and while the logistical and funding challenges around this election are real, they do not excuse clear mismanagement in a system overly reliant on political appointees and badly in need of reform. While the President makes every effort to prevent votes and voters from being counted, it could not be more critical that the Board demonstrate basic competence to instill basic confidence that our fundamental right and responsibility to vote will be protected."