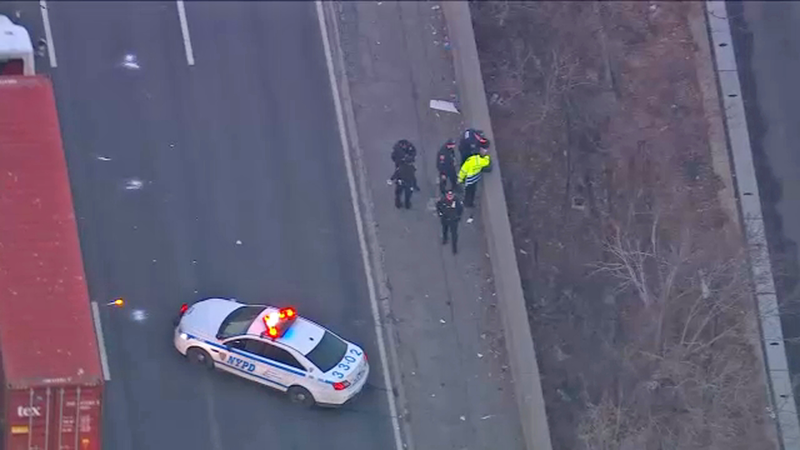 A 34-year-old reputed gang member was fatally shot inside the Astoria Houses in Queens around 1:15 a.m.

The man was shot in a third floor hallway. He was struck in the chest and pronounced dead at New York Presbyterian Hospital

The shooting appears to be gang related, and the victim is known to police as a gang member.

He had dozens of prior arrests, including for assaulting a police officer, robbery, criminal trespass and drug possession.

Next, around 2:30 a.m., a shooting investigation caused delays on the Major Deegan Expressway in the University Heights section of the Bronx during the Friday morning rush hour.

The 44-year-old shooting victim told police he was a passenger in a vehicle on the southbound expressway when another car pulled up and a person popped out of the vehicle's sun roof and opened fire.

The victim was driven to Bronx Lebanon Hospital, where he was in stable condition being treated for non-life-threatening injuries.

Police closed part the highway for several hours as they searched for evidence based on the victim's narrative.

No arrests have been made in that shooting, as well.

Police say there have been 133 shooting incidents so far this year, with 151 victims -- a 35% increase from this time last year with a 39% increase in victims.

Mayor Eric Adams got emotional in a speech about gun violence Thursday, decrying years of bureaucratic failings that he linked to the shooting death of Jayquan McKenley, an 18-year-old aspiring rapper killed in Brooklyn Sunday.

"We have betrayed an entire generation of Black and Brown children of color who are at risk," Adams said. "(McKenley) was part of a scene that uses music as a challenge on social media posts, posts that bled out to violent real word confrontations. It was right there for all to see. Our city should have done more."

The mayor tasked every city agency and department "to find new and better ways" to help at-risk children, hoping that taking steps to pre-empt kids turning to gangs will help stem the tide of gun violence long term.