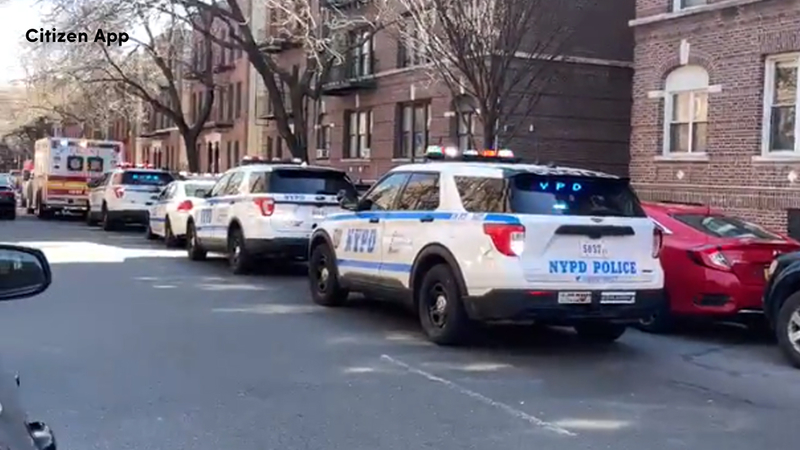 ASTORIA, Queens (WABC) -- A man allegedly wielding a machete was shot by police responding to a domestic dispute in Queens on Monday.

It happened on 33rd Street and Broadway in Astoria just before 10 a.m.

NYPD Chief of Department Kenneth Corey said that four uniformed officers arrived at the scene when the man's girlfriend called 911.

Brianna Cortez apparently told them that the father of her 3-year-old child refused to leave their apartment, took a lot of pills, said he wanted to die, and was holding a machete in his hands.

Corey said that as officers removed people from the building, the 27-year-old suspect, Eduardo Andrade, confronted them in a narrow apartment hallway holding the 911 caller's mother.

Officers on the scene say that they ordered the man to drop his weapon several times.

"After officers were able to get the older woman out of the apartment, officers deployed a Taser," Corey said. "The Taser had no effect. One officer then discharged approximately three rounds, striking the male in the groin area."

The officers immediately requested an ambulance, which arrived in two minutes.

The suspect was shot in the groin and was in surgery at Elmhurst Hospital, where he is expected to recover.

Two police officers also went to the hospital for a medical evaluation but were not struck by any gunfire.

The child was inside the apartment at the time of the shooting but was not injured. The NYPD says ACS will investigate further.

Corey confirmed that there is an extensive past of domestic incidents between Adrande and Cortez, including multiple allegations of domestic violence and orders of protection, many that were violated.

Cortez, however, disputed the police account of the events.

"This is why you don't call NYPD for help," she said. "They will shoot you and then blame your family."

Holding her 3-year-old son, a frantic Cortez said her child is traumatized after cops opened fire.

"They didn't ask questions," she said. "They dragged my 53-year-old mother to the floor, ripped her shirt off, and then shot my son's father twice in front of him."

Cortez denies any domestic history and also contends the Taser was never used.

"Did he have a machete? Did he lunge at police? No, he did not," she said. "No he did not. And my mother was in between both of them. They dragged my 53-year-old mother, and then they shot him."

Police are not saying how the machete was used or whether he lunged at cops, or if he was holding it against his girlfriend's mother.

They said Andrade also has a history of confrontations with police, authorities said, including an assault on a police officer last April.

On April 6, 2021, police say he punched an officer as police were arresting him in his Queens apartment.

He told the officer, "The only way I am getting out of here is if you kill me."

He has three other prior arrests for resisting arrest.

There are similarities between that arrest and Monday's incident that police will be looking at as part of the investigation.

Corey said that body cameras were activated on the officers involved and that their footage is being reviewed.