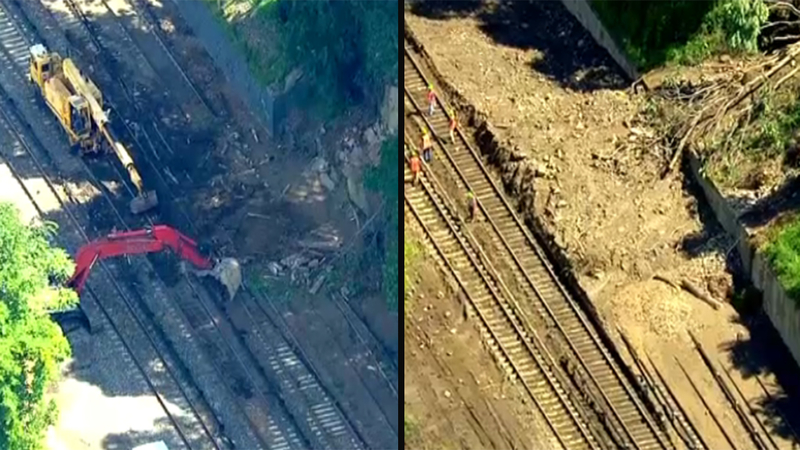 Crews have been working around the clock since early Thursday to restore infrastructure damaged by Ida's record rainfall and flooding.

Metro-North President Catherine Rinaldi said the first trains will begin operating Tuesday shortly after 4 a.m., and trains will operate every half hour at all Hudson Line stations during the a.m. and p.m. commutes and hourly at other times.

Poughkeepsie service will be hourly at all times.

Derick Waller reports on the flooding deaths from Flushing.

Following initial post-storm inspections and clearance of trees, vegetation and debris from the tracks, MTA crew members and contractors spent more than 100 hours restoring slopes and ballast that were washed out by floodwaters at multiple locations throughout the Hudson Line, installing 600 cubic yards of heavy stone fill to stabilize areas surrounding tracks for safe operation.

Much of the work was at Greystone, where waters cascaded down from Warburton Avenue creating a mudslide onto the tracks.

"The heroes of this story are the employees from Metro-North, MTA Construction & Development and contractors who have worked around the clock since the storm to get our service restored as quickly as possible following a historic amount of rainfall," Rinaldi said. "I thank all of the employees and contractors who have been out there for their dedication to getting our customers moving again."

The railroad will operate with two of its four tracks in service between Riverdale and Tarrytown, where the northbound express and local tracks remain out of service.

Customers in this section will notice crews have erected temporary metal walkways known as bridge plates that will connect from northbound platforms to operating tracks, bridging tracks that are out of service.

The MTA's work to restore the line also allows for Amtrak Empire Corridor service to resume along with the Lake Shore Limited, Maple Leaf, and other trains that use the line, and it allows CSX to resume freight service, including the transportation of waste generated in the Bronx out of New York City for deposit in landfills.

Amtrak service between New York City and Albany will also be restored Tuesday.

Service on the Harlem Line and New Haven Line, where damage was less pronounced, resumed on Friday morning, September 3.