Woman dead after SUV plunges into canal in Westchester County 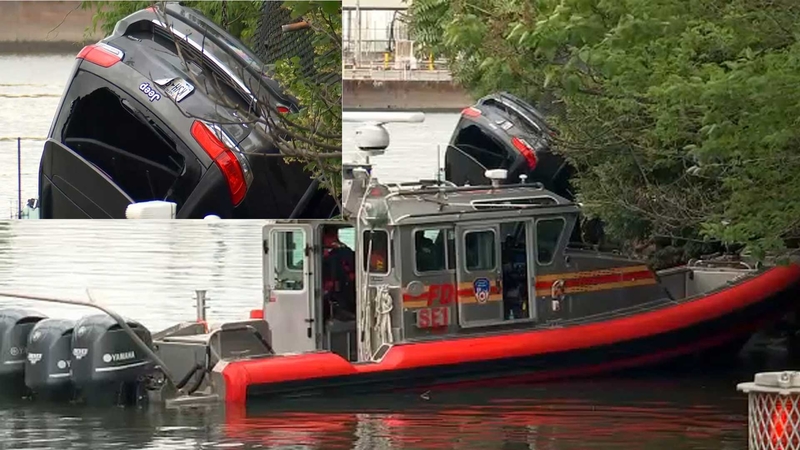 It happened just after 8:30 a.m. when the vehicle careened out of the parking lot of the BJ's Gas at 5 Secor Lane and into a canal in the section of the Hutchinson River that separates Mount Vernon and Pelham Manor, not far from the Bronx border.

Police say the vehicle was stopped at a gas pump when it suddenly accelerated through fencing, plunging into Eastchester Creek.

It quickly became submerged near the Fulton Avenue Bridge.

The FDNY sent two marine units, and rescue companies from the Bronx and Queens also responded.

Pelham Manor Police Officer John Luiso, one of the first officers to arrive, jumped into Eastchester Creek and reached the vehicle, but was unable to remove the driver from the locked car.

Four divers went into the murky water, in what proved to be a difficult recovery effort.
EMBED More News Videos

RAW VIDEO: The call came in at 8:38 a.m. Friday after a car went through a fence at a gas station near 5 Secor Lane and the Sulton Avenue Bridge.

They were able to pull the female driver from the water, but she pronounced dead at the scene.

According to the Mount Vernon Fire Department, the victim was the only occupant of the vehicle.

Video from an Eyewitness News camera showed a gray Jeep SUV being pulled out of the water by a crane.

The Fulton Avenue Drawbridge, which was closed during the investigation, was reopened a couple of hours later.

The identity of the driver has not been released, but the question remains why she lost control. It is unclear if there was a medical issue, or if it may have been a deliberate act.