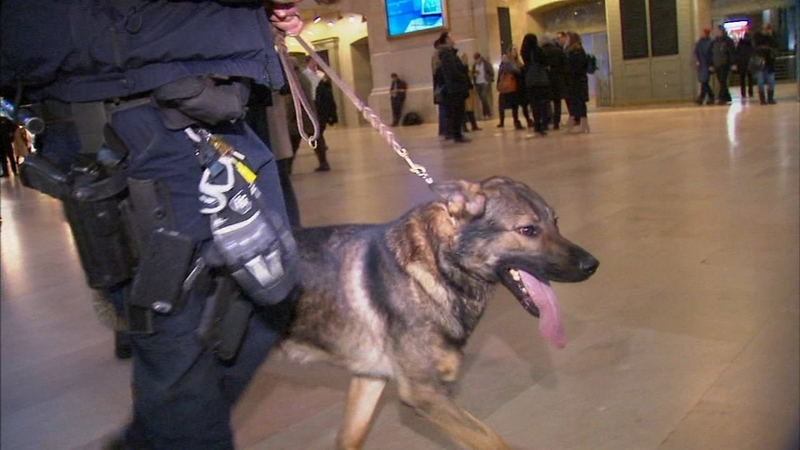 "You got to just keep your eyes open. Always looking around, seeing what's going on and keep the dog out. The dog alone will deter terrorism," said MTA Officer Ken Johnson.

He and his dog Opie are trained in explosives detection and move defly through the crush of travelers and shoppers at Grand Central this time of year.

The dogs, officers say, are often the first to detect something that may seem out of place or a suspicious package.

"This is a very soft target, as you have all heard, and we try to harden that as much as we can with the dog pressence," said Lieutenant John Kerwick, the tactical commander of the MTA's K-9 unit.

In the wake of Monday's bombing in which a terror suspect detonated a pipe bomb strapped to his body in a crowded subway tunnel, there is now a heightened sense of security in these crowded surroundings.

"We try to pool our resources when there is really a critical incident going on which is just good practice," Lieutenant Kerwick said.

Trained in explosives detection, Ronnie and his K-9 handler Sergeant Christ Serio are also on heightened patrol this day.

"We've got to step it up all the time and be on our toes and be ready all the time. We've increased our patrols," Sergeant Serio said.

One team went to check out a report of an unattended bag that proved to be unfounded.

Officers expect to answer 4,000 such calls this year alone with their canine partners.

"These dogs can stop an awful lot of bad things from happening to people here," Lieutenant Kerwick said.