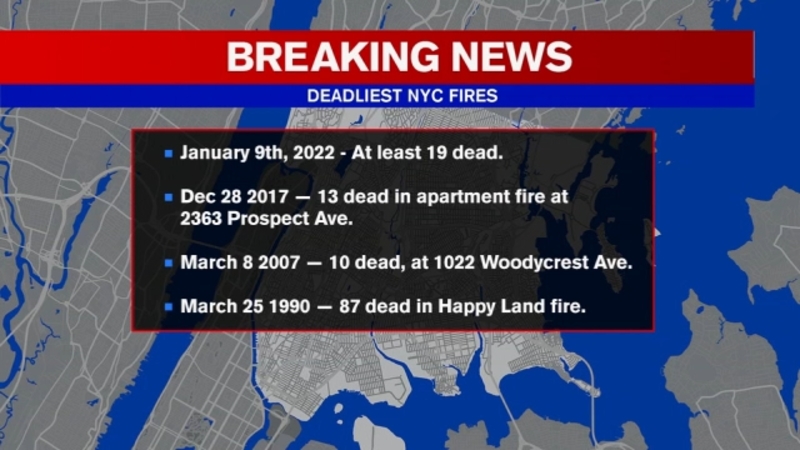 THE BRONX (WABC) -- New York City's four deadliest fires since 1990 have all been in the Bronx.

On Sunday, at least 19 people were killed, including nine children, in a catastrophic fire that broke out at a high-rise apartment building in the Tremont section, officials said, making it one of the most deadly fires since 1990.

87 people were killed in the Happy Land Social Club fire. Julio Gonzalez deliberately set the club on fire and blocked its only exit.

Gonzalez's former girlfriend was employed at the club. Most of the people who died were young Hondurans celebrating Carnival.

He was ultimately convicted of murder and arson. He died in jail serving his sentence.

Ten people were killed, nine of them children, in a fire on 1022 Woodycrest Avenue in the Highbridge section. The fire was sparked by an overheated cord to a space heater in the basement bedroom.

The woman who first noticed the fire tried to first put it out by herself, not calling 9-1-1 for several minutes. The building's two smoke detectors also had no batteries.
Those inside the burning inferno threw the children out the windows, in a desperate attempt to save their lives.

Thirteen people were killed in an apartment fire on 2363 Prospect Avenue. Officials say the fast-moving fire was started by a three-year-old boy playing with burners on the stove.

The boy's mother was alerted to the fire by the boy screaming. She escaped the apartment with her kids but left the front door open.