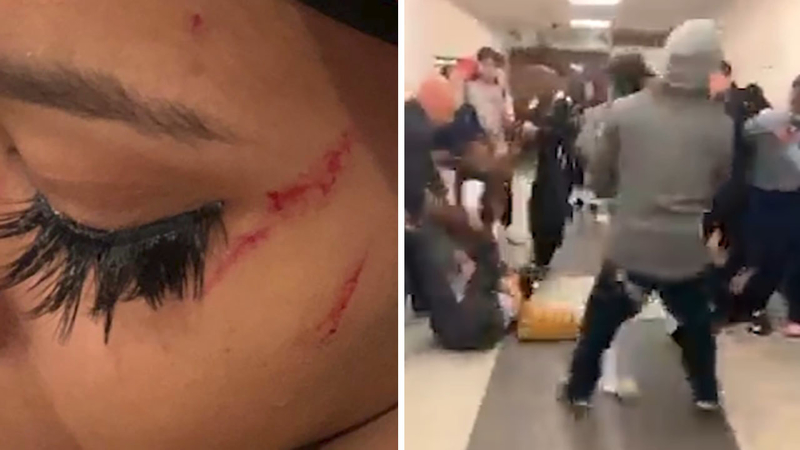 NEW YORK CITY (WABC) -- Eyewitness News has learned exclusively that New York City school safety agents have seized 5,931 weapons from students this year, according to the union for the safety agents.

It's a disturbing trend that has plagued the city's school system since the beginning of the year.

"When someone finds a weapon in the school, the very next day more weapons are brought because children say, well, they have a weapon I better bring one too," said Gregory Floyd, the head of Local 237.

Floyd said school safety agents, who are unarmed, are seizing brass knuckles, stun guns, knives and metal pipes from students. It's an issue that has been getting worse at city schools -- and one that Eyewitness News first reported in 2016.

Floyd said school safety agents seized 24 guns this school year, but in a typical year, they only take a handful of guns from students.

As evidence of the rampant guns in city schools, Floyd showed Eyewitness News Investigative Reporter Kristin Thorne surveillance video of a gun falling out of the waistband of a student at Port Richmond High School on Staten Island while the student was getting a piggyback ride from another student in the hallway.
EMBED More News Videos

Last month, shortly after the mass shooting at Robb Elementary School in Uvalde, Texas, Mayor Eric Adams addressed the number of guns students have been bringing to city schools.

He showed three loaded guns that had been seized the week before by school safety agents. One was found in the backpack of a 13-year-old.

Adams pleaded with parents to look through their child's backpacks and rooms.

"Parents aren't only parents," he said. "They are a lifeguard."

Floyd said what would also be effective is filling the approximately 2,000 vacant school safety agent positions.

Floyd said pre-COVID, the city employed 5,500 school safety agents, but that number has dropped to about 3,500.

The NYPD told Eyewitness News the city is short only a few hundred safety agents.

"Because of attrition, and the fact that during COVID, several classes of school safety agents were postponed under the previous administration, the city started the school year with hundreds fewer agents," the NYPD said in a statement.

Floyd said even if the city moved now to hire more school safety agents, it takes 17 weeks to clear and train them for the position - leaving no time for them to be in place by September.

Eyewitness News asked the NYPD how many portable metal scanners they have for city schools, but they would not comment.

"The NYPD does not comment on specific security deployments," the department said in a statement.

Father's Day is fast approaching, and a Retail Me Not survey indicates 4 in 10 simply want a day spent with family.