4 Jewish synagogues in the Bronx vandalized; search on for suspect 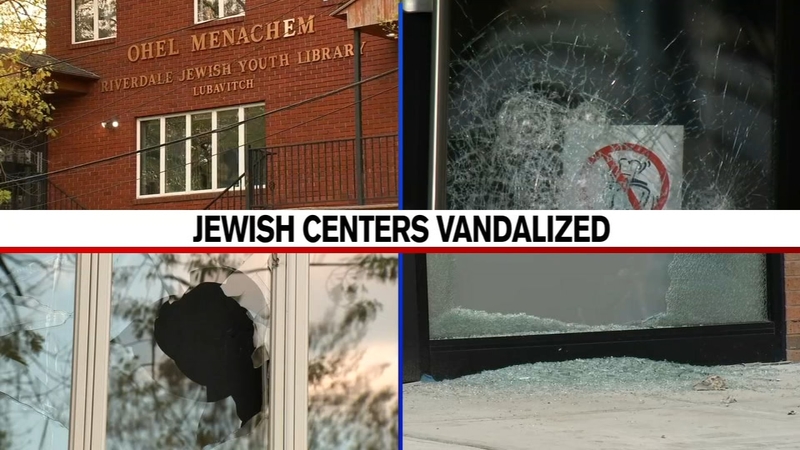 Police investigating rash of vandalism at Jewish synagogues in the Bronx

RIVERDALE, The Bronx (WABC) -- Police are investigating a rash of vandalism at Jewish synagogues in a Bronx neighborhood.

Investigators say the suspect threw rocks and smashed windows at four houses of worship between early Friday to Sunday.

As residents went for the prayers at the Riverdale Jewish Center, they walked by the heightened security.

"We felt we are in a safe place as residents or Jews," said Etty Bar-Shai.

Some are not feeling a sense of safety after seeing the smashed windows and broken glass on the ground floor of four houses of worship - including the Chabad of Riverdale - that was targeted twice in one night.

Police are now investigating the rash of vandalism as hate crimes. Video shows one man seen repeatedly smashing windows with rocks at the Young Israel of Riverdale.

Police say the crimes happened between early Friday morning and late Saturday night. The proximity of the synagogues and the time of the crime leads investigators to believe they are only looking for one suspect.

"I try and be devil's advocate to try to understand where they're coming from," said Riverdale resident Edith Tardivono, "maybe they may be on something, they weren't raised right."
For a community proud to welcome all kinds, the latest pattern is hitting close to home.

As of Sunday night, all Jewish houses of worship in Riverdale have increased security.

These latest crimes are under investigation by the 50 Precinct and the hate crime task force.