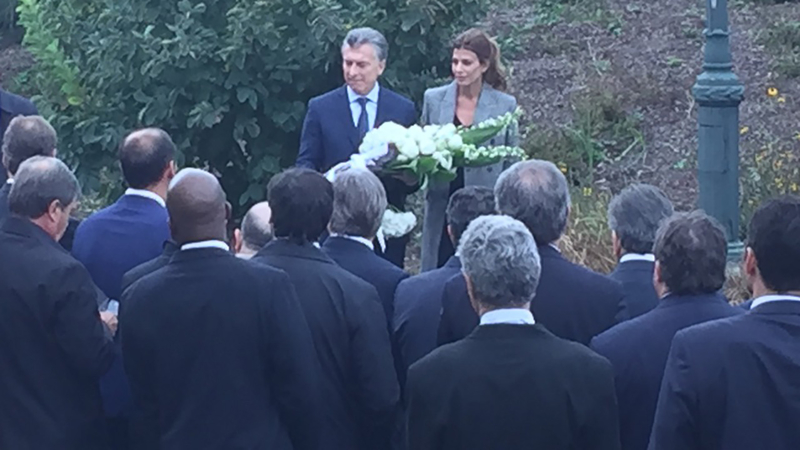 TRIBECA, New York (WABC) -- In a solemn gesture with a simple bouquet of white flowers, Argentina's president honored his fellow countrymen who died in the terror attack in New York City last week.

"I want to thank you in the name of all the Agentines for the care given to the Argentine group and their family," President Mauricio Macri said.

With a heavy heart, Macri paid his respects to the five tourists who became victims in the horrendous truck rampage that left eight people dead. Speaking in Spanish, he said he believes they and the people of New York are united together.

"We have to put intelligence and work with major coordination in all countries, because terrorism doesn't distinguish what country you live in or have any limits," he said.

Joining the president was Guillermo Banchini, one of the survivors of the group of 10 men, and Mariana Marro, whose husband was seriously injured in the attack.

Courtesy of Trevisan family via AP

"Mr. President, we feel a tremendous sense of unity," Mayor Bill de Blasio said. "A deep connection right now, and we share the same heartache. We share the same grief, because this is a loss we have in common."

The men, all high school classmates, had come to New York City to celebrate their 30th reunion. They had been enjoying a beautiful fall afternoon riding on the bike path when tragedy struck.

"Mr. President, we will forever remember them as New Yorkers," de Blasio said. "And feel they are a part of us."

"Unfortunately, five families have been destroyed because of this," President Macri said. "But this should unite us more. This has to reconfirm our conviction and compromise for peace."

Macri and others then laid the bouquets of flowers along the wall near the area where the men were last seen alive.