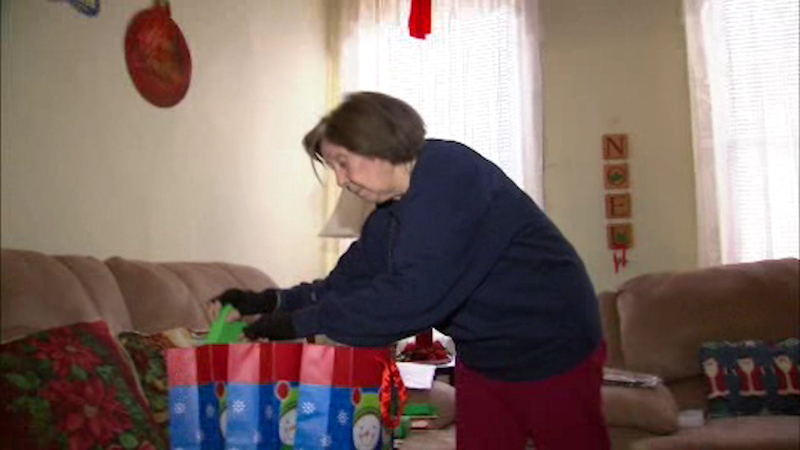 BROOKLYN, New York (WABC) -- One Brooklyn mother has got some moxie. She noticed something was up when her gas bill went from a hundred to thousands and took action, complaining long and loud.

Eloise Sprance had gloves on her hands and was wearing three pairs of socks inside her own kitchen, where 7 On Your Side took the temperature at a chilly 50 degrees.

The 84-year-old's stove won't light, and the water only runs freezing cold.

Sprance says her heat was shut off the first week of December.

Her gas was shut off after an alarming spike in her bill. Last spring, it blew up from around $100 per month to more than $5,000. So she called National Grid to investigate.

7 On Your Side asked the pizza shop owner, Eric Lin, if he knew about this, and he blamed his contractor, saying he didn't do all the work.

Lin's owned the Little Caesar's franchise for the last two years. He told 7 On Your Side his gas bill for their multiple pizza ovens remained the same while his upstairs neighbor, supplying the shop's gas, began ballooning five months ago.

We asked him, why did his gas lines get combined with his neighbor in May? He said he's trying to figure it out.

The New York City Department of Buildings and National Grid are trying to figure that out too. In the meantime, their gas and hers was shut off.

Outside that day in mid-December, it was a frigid 21 degrees. 7 On Your Side called the city and the utility to see if we could help warm things up. And within a few hours, National Grid did its best, restoring service for Mrs. Sprance.

After a cold week, the mercury was finally rising and that massive bill was corrected.

Sprance was notified she will get a refund from National Grid of nearly $6,300.

How can you foil this type of fraud? First, watch for high power bills and power boxes that have been tampered with. Document and report problems to the power company. It can be costly and potentially dangerous.
Related topics:
new york citynational gridtheftheat7 on your sidefraud
Copyright © 2021 WABC-TV. All Rights Reserved.
7 ON YOUR SIDE
Passport backlog has travelers scrambling, frustrated
Tabernacle damaged by out-of-control NYPD SUV gets payment
Should you Buy Now Pay Later with purchases?
7 On Your Side helps customer avoid hot tub hustle
TOP STORIES
Brothers in car stabbed by suspects on e-scooters
14 injured as driver causes chaos in attempt to flee NYPD
Moderna COVID-19 vaccine remains 93% effective for up to 6 months
Accuser Boylan to sue Cuomo as 5th DA requests materials
AccuWeather: Clouds break for sun
Search for attacker who beat woman on subway, attempted to rape her
COVID Updates: Heart issues after vaccine uncommon, study finds
Show More
Bill Gates says he regrets time spent with Jeffrey Epstein
Biden administration to announce actions to reduce pollution from cars
NYC readies for vaccine mandate, Broadway reopens, auto show canceled
Search for 2 men who beat, stabbed man in Brooklyn
Volunteers going door to door to encourage vaccine holdouts
More TOP STORIES News