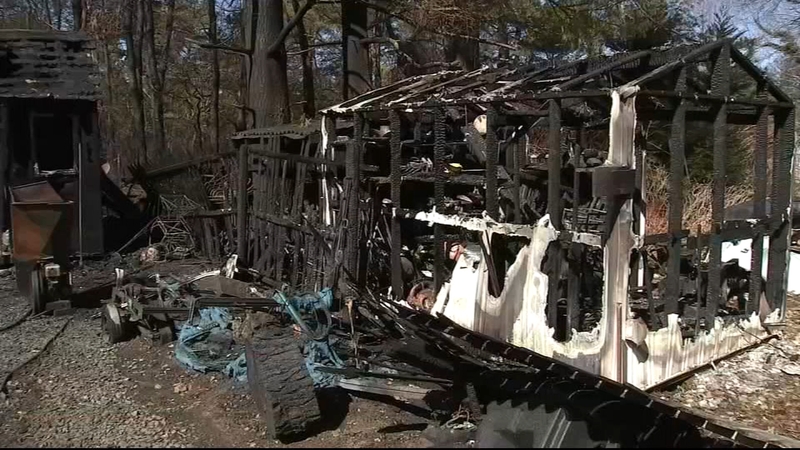 BRICK TWP., New Jersey -- A massive forest fire that burned 170 acres, damaged nearby structures and seriously injured a firefighter on Sunday was mostly contained on Monday.

Aerials provided by Chopper 6 offered a better look at how close homes along Francis Road in Brick Township, New Jersey came to destruction as flames raged during a brush fire Sunday afternoon.

Property lines that backed up the more than 170 acres of charred forest were spared the worse of the flames.

But, there was still plenty of damage.

Singed grass, charred fencing, and gutted sheds were a standard sight in backyards.

Large brush fire burning in Ocean County, NJ near Lakewood amid gusty winds and dry conditions in the region.

Homeowners like John Stoneham were in awe of the swift response by fire crews that undoubtedly saved the neighborhood.

"Nobody lost their homes. Nobody lost a life or a pet. So, very fortunate," Stoneham said.

On Monday, fire crews were still in the neighborhood dousing hot spots.

Firefighter and homeowner Jim Scott became overwhelmed by the dramatic images that unfolded.

"I really want to thank all my brothers for coming out and helping us," Scott said. "I'm from the neighborhood."

In all, 29 homes saw some level of property damage, but only one remained tentatively uninhabitable.

"Luckily the hard work of the firefighters really is what saved these houses," Ducey said.

But, as brush fire season begins, state fire officials know this, unfortunately, may be a taste of things to come and urged everyone to use caution.

"Any forest fires around the state after they are extinguished, please stay out of the areas don't fly drones, don't run vehicles through these areas cause there will be hot spots in the ground for a considerable amount of time," said DEP Natural & Historic Resources Assistant Commissioner Ray Bukowski.